When someone dies, we remember all of his or her good traits. There is hardly space to think about the bad qualities. Tributes overflow with the only the best words we can to describe the deceased. Most often, the loved ones wish to remember only the good things.

But this is not the case with tiong Ed.  If you come to think of it, there really isn't anything negative to say about Tiong Ed. He was simply an altruistic person. It's not that we chose to highlight only his good traits. I personally couldn't remember him having negative qualities. He was just one of those rare individuals who had the kindest of hearts. In a world of artists, photographers and journalists, a world where individuals have the biggest of egos, where backstabbing was a daily fare, where genuine admiration, mentoring and respect often took the backseat over self-preservation and where men have a tendency to be bigger than themselves, Tiong Ed stood out as a kind soul who had only the best intentions for people. Not once did I hear him backstab a person. On the  contrary, he supported and mentored each and every individual who came his way. He listened and listened well. No biases, no judgement. He didn't care for recognition, he only did his best. He helped friends even if he personally could not. He always found a way to help those in need. He was there on all occasions that were important to those he considered a friend -- birthdays, baptism, the death of a loved one. And he was there every night. He was always there even if he had to walk a mile or to borrow money to get there. Yes, he was always there to ease the burden.

He died on an ordinary Tuesday morning, in a government hospital with nothing in his pocket but ninety pesos he borrowed from his landlord; no friend or loved one to hold his hand. But the life he lived was rich and extraordinary enough, an endless sea of friends and loved ones came to his wake and laid him to rest. It was a life well-lived by an individual who stood out in a world so insane that those who deserve to live longer die ahead of so many others who dont. 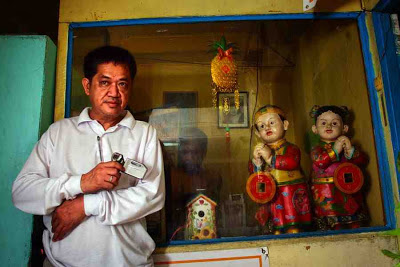