I saw the Matterhorn, the mountain in Toblerone and it was majestic. Read my story here: 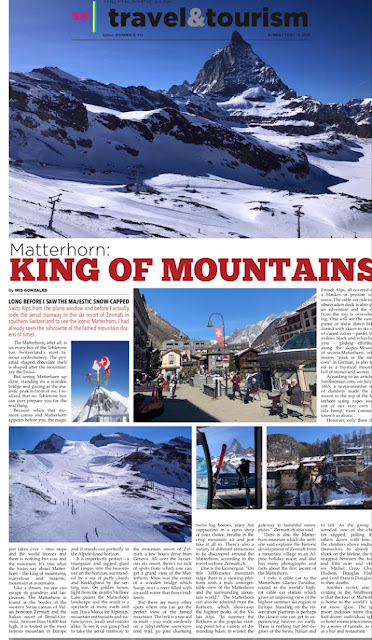 11:09 p.m., 2019, two years after my last entry. It is the night before the mid-term elections. I have been working on my website the past days with the help of fellow journalist Gerard dela Pena of TV5. Thank you so much Gerard.

It's still a work in progress. I am redesigning it, too. But for now, it's good to be back. And I am happy to share one of my favorite columns on Eyes Wide Open:


The 1984 confidential report on our bloated dollar reserves.

EYES WIDE OPEN - Iris Gonzales (The Philippine Star) - May 6, 2019 - 12:00am
It was a move that stunned the country’s lenders, but very few can remember how it even happened.
I’m referring to the time when the Philippine Central Bank overstated the country’s dollar reserves, way back in the ‘80s when Manila was in chaos and perhaps the only thing that kept Filipinos going was the Bee Gees’ Stayin’ Alive.
It’s no longer a problem now, but when I wrote about the Philippines 1983 debt crisis weeks ago, some readers asked why we overstated our dollar reserves by $600 million and how it happened.
It took a while for me to find out, but I finally did, thanks to a confidential Monetary Board report dated Oct. 19, 1984.
The report was based on hearings conducted by the Monetary Board at the time with key officials of the Central Bank and the Philippine National Bank (then still owned by the government); and on an audit conducted by SGV & Co. on the transactions, as requested by the MB.
I spent nights leafing through the report, which was jaw-dropping to say the least.
Bloating our dollar reserves was no doubt one of the Philippines’ biggest lies.
Here’s what I gathered from the confidential documents:
1) There were five types of transactions which all had the effect of overstating the country’s gross international reserves. They were done by Central Bank officials.
2) The special transactions were done regularly from November 1982 to September 1983 using placements with PNB’s branches overseas. At the time, lenders were tightening credit to the country because of “the general nervousness on the economy.”
3) “It was at this point that the Central Bank apparently looked into more imaginative ways of improving the balance of payments  and maintaining its reserves position. This gave rise to these so-called special transactions.”
3) Transactions ranged from $500 million to a whopping $1 billion, but these were not funded. They were merely accounting entries.
4) Another transaction involved the sale by the Central Bank of US dollar treasury bills to PNB Hong Kong, amounting to $100 million. No actual delivery happened, but the proceeds were recorded as foreign currency time deposits, thus increasing the international reserves on paper.
5) “In the first quarter of 1983 alone, the Central Bank has had to contend with an average short position of $150 million to $175 million daily.”
6) Said the report: “the transactions have been found to be fictitious without any funding, in effect generating non-existent reserves for the Central Bank.”

This went on for almost a year. How sad and embarrassing it must have been for our country.
Imagine we had to lie about our dollar position so we could borrow money from lenders to pay for imports and to fund the grandiose projects of the late dictator Ferdinand Marcos. This, while his wife Imelda went on wild shopping sprees around the world. Remember that story about how an airplane that departed Rome had to do a mid-air U turn because the former first lady realised she’d forgotten to buy some cheese?

Why did Central Bank officials do it? The report concluded that it was a desperate measure for an institution caught in the middle of a liquidity crunch.
Now why am I resurrecting the past? For sure, it’s not nostalgia. I was not yet a journalist at the time. I was in first grade elementary school without a clue of what was happening in my country.
But in response to queries from readers, I decided to dig up the dusty report. After reading it, I too was stunned.
For posterity, it needs to be told and retold especially today, the golden age of blatant lies.
More importantly, let us remember the fundamental reasons behind our sorry situation back then.

It looks impossible now that we could fall back to those times, but we can never be too sure. These days, we may be sitting on enough dollar reserves, but things can change easily. Wasn’t it just less than a year ago when our reserves hit new lows?
An external shock can hit us in a snap of a finger, just like Thanos’ apocalyptic snap.
Thus, bit by bit, we should continue building our reserves. Many countries are even diversifying their holdings to help preserve the overall safety of their foreign exchange assets.
BPI lead economist Jun Neri believes the government can take advantage of the recent ratings upgrade by Standard & Poor’s to build up our foreign currency reserves.
He noted that the size of the country’s dollar reserves now -- at $83.2 billion in March -- is less than 80 percent of our annual imports which climbed to $108.9 billion last year. In contrast, in 2013, the GIR was 50 percent bigger than annual imports.
Is less than 80 percent worrisome? He said it’s not necessarily worrisome, but it can be when there is extreme external vulnerability such as a recession in the US.
Anything can happen for sure.
No, I’m not a naysayer and I’m not calling the Four Horsemen either, but if they do come and we’re not prepared, it might be too late to do anything else.


Posted by Iris Cecilia Gonzales at 8:18 AM