She stands out from the crowd. One glance and I instantly notice her almond-shaped eyes, the kind that would make you look again. Her high bridge nose is perfect and her cherry red lips smiled the whole time I was talking to her. Strands of her chestnut brown hair fall just right on the forehead, concealing the wrinkles of her 81 years.

"I am Madame Palerma. I was also a journalist like you," she says in perfect English. Her voice is deep, firm and solid and not once did it show her old age. She is just right outside the door of what she calls her home -- a dark, one room shanty.

It is a rainy Sunday afternoon and I am in Valenzuela, Bulacan with photographer Jes Aznar. His task is to shoot, mine is to interview and take a video as he shoots. We reach the interior after two hours of struggling against heavy rains and tormenting traffic. I offered to take the wheel many times as I sensed his frustration but (to my relief) was always turned down.

We are working on a book project and our second assignment is to search for a 52-year old man who lives near a basketball court and a tricycle terminal in a depressed community in Barangay Mapulang Lupa, Valenzuela.

There are at least three basketball courts with a tricycle terminal nearby in Barangay Mapulang Lupa. For a while there, I didn't think we would find him.

We succeed after a few more minutes and after asking bystanders for the nth time where our mystery man could be.

Journalism, after all, is about "finding it." The editors won't really care how you find it but you better damn be able to find it -- your subject, your assignment, your interviewee, the story -- because no amount of excuse would do unless it's a matter of life and death.

That's what Madam Palerma congratulated us for. The former radio announcer, as she introduced herself, said I reminded her of her early days.

"I used to be a radio announcer. I miss the radio booth. I miss being a journalist," she says.

"Thank you for being here," she says. "We hope you can come back."

She talks of the old times. That she would go to different places in search for stories. That she laughed many nights away during her shifts at the radio booth. That she met so many people in the course of her work.

I am holding the video camera while talking to her. Jes sends me a signal that it is time go. We are off to Caloocan for another assignment.

I thank Madam Palerma for the chat. She seems so happy to see the two of us working as she used to.

"I hope you can come back and visit my house," she says.

As we drive out of the community, I think of Madam Palerma and her passion for her work.

I don't know if I'll ever see her again but I'm sure I'll never forget her face. It is a picture of a contented and proud journalist who is rich not with material wealth but with stories of her years of experience.
Posted by Iris Cecilia Gonzales at 4:03 AM 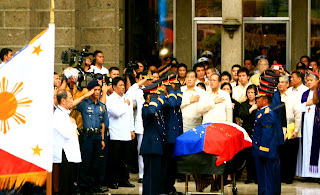 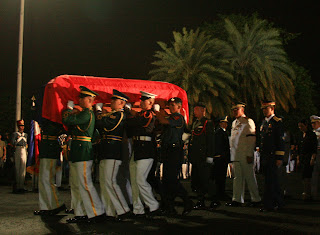