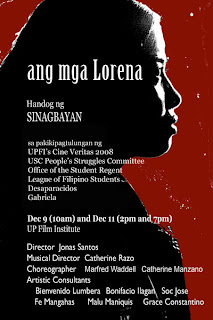 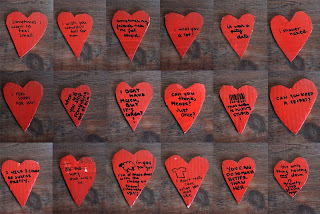 My cousin Aaliyeh Afshar, along with other teenage photographers, started this interesting project which is all about writing something to someone you may not know.

I invite you to check it out at www.littleredheart.tk
Posted by Iris Cecilia Gonzales at 1:18 AM

An appeal from the Asian Human Rights Commission

The Asian Human Rights Commission (AHRC) deeply regrets to inform you of the killing of three persons, including two political activists, in separate incidents recently. The AHRC is gravely concerned by these renewed, if not continuing targeted attacks, which exposed the realities that unless the perpetrators of the killings there are
prosecuted, activists have had to face the risk of being murdered for doing their work.

CASE DETAILS: (According to information from the Alliance for the Advancement of Peoples' Rights (KARAPATAN) and other sources)

On November 10 at 6pm, Rolando Antolihao was in his house in Kapalong, Davao del Norte when an unidentified person, who claimed to be his neighbour, come knocking on their door. Before Rolando allowed the person in, he heard him from inside to have introduced himself by a name known to him.

However, soon after Rolando opened the door, the person shot him dead with a .45 caliber pistol. He suffered several gunshot wounds to his body. His wife, Elvira, claimed that her husband was a rebel returnee; and was also the head of the village watchman at the time of his death.

Rolando was a village coordinator for a political party, Bayan Muna (People First). Bayan Muna is the same political party whose members and leaders have been targeted for extrajudicial killings in recent years.

Also, four days before Rolando's murder, another leader in a nearby province, Danilo Qualbar, had also been murdered.

Forty-eight-year-old Danilo was on his way home at around 5:30pm in Compostela, Compostela Valley when he was shot dead by unidentified armed men. The gunmen, onboard a red XRM motorcycle, shot him in Crossing Osmeña in Baranggay (village) Osmeña, about four kilometres from the poblacion where he had come from.

It is reported that an eyewitness had informed residents there that before Danilo was shot dead he was seen being stopped by armed men. They also saw them talking to him before shooting him dead. He suffered four gunshot wounds.

Earlier that day, Danilo told his wife Aurelia that he would go to the poblacion (town) to purchase goods for their household. Their house in Sitio Nursery is about 30 minutes away from poblacion and about 300 meters away from where the detachment of the 72nd Infantry Battalion, Philippine Army, is stationed, which raised allegations
that the security forces could have been involved.

Danilo was Bayan Muna's cluster coordinator and also the Public Information Officer of the Compostela Valley Farmers Association at the time of his death.

In another incident, a farmer had also been murdered in front of his son in Sitio Pasalilo, Barangay Mabini, Mulanay, Quezon.

On 13 October 2008 at 6am, Alejo De Luna was together with his eight-year-old son Mark Angelo, tending their farm located close to their house. Alejo's wife, Angeline, had gone out of the house after preparing coffee where she saw nine fully uniformed and armed soldiers surrounding her husband and son.

It is alleged that the soldiers were attached to the Bravo Coy of the 74th Infantry Battalion (IB), Philippine Army.

At the time, Angeline she saw for herself that one of the soldiers was pointing his gun at her husband and had him overheard to have said: "Wag kang tatakbo!" ("Dont run!"). The soldiers allegedly shot Alejo and his son when the latter ran because of fear. His father was supposed to catch up on him but the soldiers shot him instead. Mark Angelo survived from the incident.

After the shooting, the soldiers entered into the De Lunas house. They allegedly ransacked the place and conducted searches into the family's belongings. They, too, threatened Angeline that they would bring her to the army camp but they did not. The soldiers left from the place at 11am of the same day.

Only after the soldiers left was Angeline able to seek help from a village council member, Tess Badillos. Later she learned that her husband, Alejo, had died from two gunshot wounds.

Please write letters to the concerned authorities requesting them to ensure that these cases are thoroughly investigated.

The AHRC has also written letters to the Special Rapporteurs on Extra-judicial, Summary, or Arbitrary Executions calling for intervention in this case.