Photos from the site of the November 23 Ampatuan Massacre will be
exhibited at the House of Representatives (HOR), in another leg of the
roving exhibit organized by the National Union of Journalists of the
Philippines (NUJP). 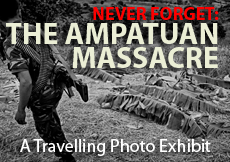 the exhibit at Congress
will start on May 23, exactly a year and a half after the killing took
place, and will run until May 26.

The photo exhibit will be staged at the Congress’ North Wing Lobby. It
will formally open at 10:30 a.m., with House Speaker Feliciano
Belmonte gracing the ribbon-cutting ceremony.NUJP partnered with the
office of House Deputy Speaker Erin Tañada to bring the exhibit to
Congress.

Veteran photojournalist Jes Aznar curated the exhibit and edited the
photos, which were contributed by members of the Philippine Center for
Photojournalism (PCJ).

To follow shortly is a commemorative program, where media
practitioners and relatives of the massacre victims will give messages
of thanks and solidarity.

An update on the status of the legal case and the campaign for justice
for the massacre victims will be provided in the program, as well.
Also to be provided are updates on the contempt charges the Court of
Appeals (CA) is planning to file against Monette Salaysay, widow of
massacre victim and Clear View Gazette Publisher Napoleon Salaysay,
and Rowena Paraan, NUJP secretary general.

Considered the single worst killing of journalists in the line of duty
in recent years, the Ampatuan Massacre left 57 dead, 32 of which are
media practitioners.


(This statement is from the NUJP. Photo by Jes Aznar)
Posted by Iris Cecilia Gonzales at 8:15 AM