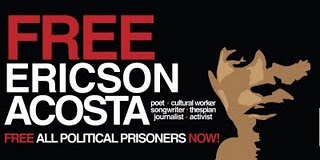 Below is an appeal to support the Ericson Acosta Legal Defense Fund from the Free Ericson Acosta Campaign.
Dear Friends,
Last February 13, former UP activist, journalist and cultural worker Ericson Acosta was arrested by the military in San Jorge, Samar on the suspicion that he was an NPA rebel. He is currently detained at the Calbayog sub-provincial jail and faces trumped-up charges of illegal possession of explosives. Contrary to the AFP claims, Ericson was unarmed and in the company of a local barangay official at the time of his arrest. He was held for three days without charges and was subjected to continuous tactical interrogation by the military.
Ericson was a former editor of the Philippine Collegian in UP, a former chair of the student cultural group Alay Sining, and a former chair of the campus alliance STAND-UP. He is a writer, journalist, poet, thespian, singer and songwriter. His works remain relevant on and off campus. Since his UP days, Ericson has worked closely with the poor and oppressed.

We his friends, together with his family and human rights groups, are working for his immediate release and for the dropping of all the fabricated charges made against him.

We appeal for your support for the legal defense fund which we have put up for him. The funds raised will go to Ericson’s legal defense and medical needs. There are the inherent difficulties faced by the family who are based in Metro Manila while Ericson is detained in Samar.

Through your help, we can see to it that Ericson will be released and be reunited with his family and the people he serves.

Thank you for your support!
Posted by Iris Cecilia Gonzales at 8:18 AM