BAGONG SILANGAN EVACUATION CENTER, Quezon City - In the middle of all the dead people, a mother tries to breastfeed her baby. In another corner, a group of kids while the time playing with one another. A grandmother weeps in desperation. She lost eight of her grandchildren. A father stares at his dead son in disbelief. There is a mad scramble for hot lugaw by the door. Bags of clothes are strewn grotesquely around. Candles for the dead are burning. The victims need all the help they can get. 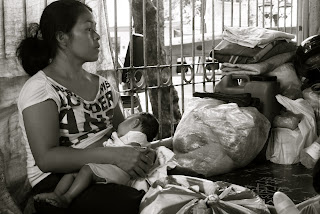 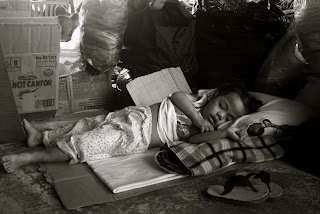 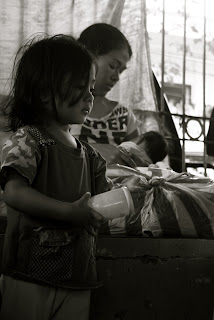 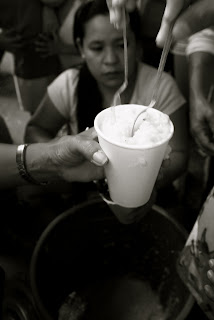 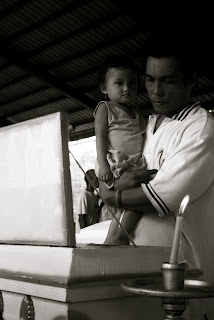 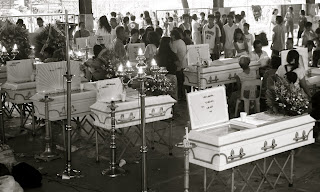 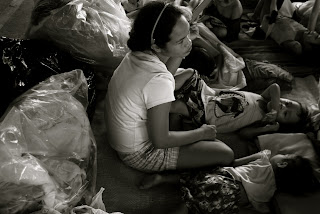 Posted by Iris Cecilia Gonzales at 11:42 AM

MANILA, Philippines - The government’s budget deficit swelled to P210 billion as of end-August, only P40 billion shy of the revised fiscal gap ceiling of P250 billion for the whole year and a sharp 561.5-percent increase from the P31.7-billion deficit registered in the same period last year, the Department of Finance (DOF) reported yesterday.

A sharp fall in revenues also caused the August fiscal position to swing to a P22- billion deficit compared with a P1.7-billion surplus in the same period last year.

Despite the widening shortfall, fiscal authorities are still maintaining the P250-billion budget deficit ceiling for 2009. “We will try to contain it at P250 billion,” Finance Undersecretary Gil Beltran said.

He said the interagency Development Budget Coordination Committee (DBCC) has yet to meet to assess if there is a need to revise the 2009 deficit ceiling of P250 billion which is 3.2 percent of gross domestic product (GDP).

A widening deficit means that the government is spending more than what it is earning.

For the eight-month period, the government’s total revenues reached P739.1 billion, 6.5 percent below the P790.3 billion generated in the same period in 2008.

One of the culprits for the low tax take was the Bureau of Internal Revenue (BIR), the government’s main revenue generating agency. The agency collected only P500.8 billion from January to August, or 5.9 percent below the P532.1 billion it raised in the same period last year.

The BOC, the government’s second largest revenue agency, collected P147.1 billion during the eight-month period, 12.1 percent below the P167.5 billion it generated in the same period last year.

Revenues generated by other offices including the Bureau of the Treasury – which complete the P739.1 billion total revenues for the eight-month period – amounted to P46.2 billion, slightly higher by 1.3 percent compared to the P45.6 billion recorded a year ago.

Expenditures, on the other hand, rose to P949.1 billion from January to August on account of the government’s pump-priming efforts. This is 15.5 percent above the P822 billion spent in the same period last year.

For the month of August, total revenues declined by 20.1 percent to P95 billion from the P118.9 billion recorded a year ago.

BOC’s revenues also declined by 28.5 percent to P18.2 billion – mainly due to low import volume – from P25.4 billion it raised in the same period last year.

Revenues of the Treasury also declined to P3.5 billion or 61.1 percent below the P8.9 billion it generated in the same period last year.

Only the revenues generated by other offices – comprising mainly of fees and charges collected by government agencies – registered an increase, hitting P5.8 billion or three percent above the P5.6 billion recorded in the same month last year.

Expenditures in August alone were almost unchanged at P117 billion, 0.2 percent below the P117.2 billion recorded in the same month last year.
Posted by Iris Cecilia Gonzales at 3:16 AM