The UP Repertory Company Presents...

If you are looking for something worthwhile to do on March 1, 7, 8 and 10 please watch Damas de Noche and support The UP Repertory Company. Tickets are very affordable at P200. Hope to see you there! 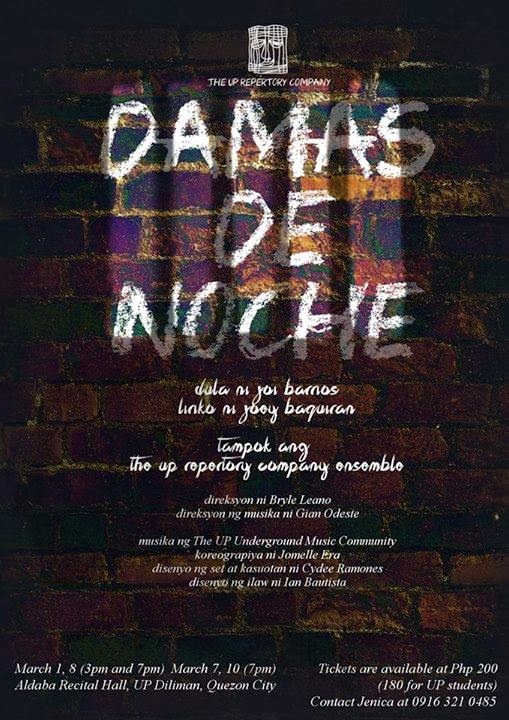 Posted by Iris Cecilia Gonzales at 1:46 AM

I steeled myself out of bed, thinking that waking up even before the roosters did would put me ahead of everyone else.

Today was National Bureau of Investigation (NBI) clearance day so I needed to start early, as early as I can, well aware of the snaking lines that applicants have to go through.

I went to the NBI satellite office inside the Quezon City hall compound where parking lots were
still empty and the Hall of Justice still asleep.

But I was deceived. At the satellite office, there was mayhem and chaos. No early riser would beat the crowd of sleep-deprived men, women, students, seafarers, young boys and girls and the elderly.  They were there since 2 am and the day's cut-off was 5 am. Had I known, I would not have bothered setting the alarm clock the night before. I would have stayed snuggled in bed, dreaming the dreams that go on and on.

I left the parking lot and drove to another satellite office in a nearby mall but there I saw the same chaos, the same sleep-deprived crowd, waiting and waiting still.

I left with all hopes dashed. It was an impossibly long queue. I had to start some other day or wait for a miracle from the heavens above.

I wondered how it is for the maddening crowd. I wondered how they could just sit and take it all -- such a very flawed system. I wondered how the government can live with the fact that for such a simple form of service, it has failed its citizens. And this is not even healthcare and public education.