snail mail and the Internet

When I woke up this morning, I found my parents' bed littered with old greeting cards of all shapes and sizes, of different colors and designs.

Mother was busy rummaging through what seemed trash to me. "What are you doing?" I asked my ever busy mom who, to me, is the best testament of obsessive-compulsiveness.

She's recycling old cards, cutting and pasting pictures to make the cards new and ready for use again, she said. Christmas is approaching and she wants to send cards to friends and family here and abroad.

I don't understand, I told her, adding that she could simply send them greeting cards through e-mail.

She sighed in frustration, as if my suggestion was the most out-of-this world piece of advice I have ever given her.

The Internet, as she likes to quotes her amigas, has destroyed the spirit of sending letters, the fun of receiving snail mails and the excitement of opening sealed envelopes from different corners of the world.

The Internet, she adds, has also removed the pleasure of going through old letters and the fun of collecting stamps.

And so there she was, spending hours recycling old greeting cards to create new Christmas cards for her amigas around the globe.

There are things technology can never give, my mother is convinced.
Posted by Iris Cecilia Gonzales at 3:00 AM

Des Ferriols of Philippine Star used to call it waiting 101. When I was still covering the central bank, Des and I used to wait for hours outside conference halls for officials coming out from meetings. Ofcourse, we would always hope they would dish out stories that would make the headlines so the hours we spent staking out would be worthwhile. But that's not always the case.

Sometimes, we would wait for my favorite government official for hours only to hear him say, "The peso is strengthening because of corporate demand for dollars." Moments such as those always make us wish that we spent the time having coffee at Seattle's Best instead of doing our job.

We waited outside the meeting of the electricity spot market board of directors and went home with headline news. It wasn't easy, though. We had to wait for two hours for the meeting to finish.

Staking out can be fun sometimes when it turns out to be fruitful. I wonder if I'll be lucky again the next time I patiently wait for a meeting to end.
Posted by Iris Cecilia Gonzales at 5:45 AM

I have not been to every prison in the country but I have seen a few -- the New Bilibid Prisons in Muntinlupa, the Camp Crame detention cell and the Quezon City jail.

Of the three, I found the Quezon City jail the one in the saddest and most miserable state.

In 1999, I joined a group of crime reporters for a coverage in that place. Nothing shocked me more. The place is way too small that imprisoned convicts and innocent people alike are cramped like animals. The fetid smell of sweat permeates even from a distance. Inmates could hardly move.

During my visit, I saw different kinds of inmates -- the forlorn, the remorseful, the guilty, the stoic, the frustrated, the seemingly contended, the accepting, the sick and the dying.

I thought of the Quezon City jail when I saw the news about Atong Ang, the prison's 192nd inmate. I don't know how Ang survived his brief stay there, just before his transfer to the Camp Bagong Diwa detention center, but I'm almost certain, he must have counted every second.

The dorm assigned to Ang has a 200 percent congestion rate. There are 191 inmates sharing a 100 square meter cell.

Prisons are there as a place for persons awaiting trial and those convicted for various crimes. But the Quezon City jail is more than a prison. If there is such a thing as hell on earth, this labyrinthine space must be it.
Posted by Iris Cecilia Gonzales at 6:49 AM

Somebody took my shoes. I was praying inside the adoration chapel of St. Paul's church this morning when it happened. I left my shoes outside as chapel rules required but when I stepped out my shoes were gone. An old lady was wearing it, as if it was her own. It was an awkward moment, seeing a total stranger wear my shoes. It's a good thing I had another pair of shoes in my car.

I remembered my grandmother, Mama Lola, who because of old age, found herself sometimes lost in her own world, oblivious to reality. Once, she asked me to buy her medicines worth P1,000. She did not realize it but she had given me P10,000. At another time, she mistook me for another apo, just like the McDonald's commercial. How scary it is to grow old. I dread the time.
Posted by Iris Cecilia Gonzales at 9:42 PM 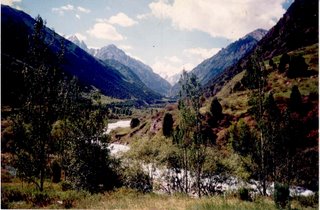