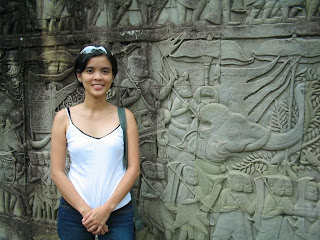 Light seeped through the temples of Angkor Wat that early morning I stepped inside Cambodia’s famous site, a historic landmark that has drawn travelers from all over the world.

Anyone with a passion for travel will enjoy the experience. There are no special skills needed or rugged outdoor equipment required for the temples of Angkor.

One just needs to have a strong sense of adventure to see what lies out there, to have the courage to knock oneself out of the daily routine, to want to learn and unlearn different things and to be interested in everything new and foreign.

Armed with this strong sense to try something new, I, along with three fellow journalists, embarked on an adventure to the provincial town of Siem Reap in the Kingdom of Cambodia.

INSIDE THE TEMPLES OF ANGKOR

Siem Reap town, nestled between rice paddies and muddy roads, serves as the gateway to the age-old temple ruins of the Khmer Rouge Empire. The temples were built between the 9th and 12th centuries. The whole park lies about five to ten kilometers north of the province and encompasses dozens of temple ruins which are more than enough to feast one’s eyes and soul.

Although there are other things to see in Siem Reap, it is best to first visit the temples of Angkor.

That’s what I and my friends did on our first morning in the province. We woke up at 4:30 a.m. to catch the sunrise at Angkor Wat, the first in our itinerary and the beginning of an adventure-filled journey throughout the dozens of temple ruins we would be visiting.

Angkor Wat is a majestic complex filled with darkened doorways, stone carvings of gods and demons and Buddhist shrines illuminated only by the flicker of a candle. The smell of incense wafted in the air.

The largest and best-preserved site among the temples of Angkor, it was built for Cambodia’s King Suryavarman II in the early 12th century as his state temple and capital city. According to the guide books, Angkor Wat was dedicated to Vishnu, one of the three Gods of Hindu. The two others are Shiva and Krishna. Hinduism was the religion in Cambodia at the time the Angkor was constructed in the early 12th century.

Indian traders came to this part of Southeast Asia as early as the 1st century, bringing with them their culture, law, politics, arts and their religion –Hinduism and Buddhism.

At the turn of the 14th century, Buddhism became the dominant religion in Cambodia which explains the many stone-carved images of Buddha in the different temple ruins.

Two days are enough to visit all the major temples and a few of the minor ones. It really depends on one’s time and energy. As for me and my travel buddies, we opted for a day pass which was enough for our resources.

Riding a four person tuk-tuk or motorcycle trailers which are similar to the tricycles in the Philippines, is a fun way to go around the park. These tuk-tuks, driven by locals, most of whom speak conversational English, may be rented the whole day or for a package of three days. Depending on one’s ability to haggle, the average price of a tuk-tuk for a day’s rent is $10 to $13. Tuk-tuks are all over the city but one can have an arrangement made through the hotels or guesthouses.

One can enjoy the temples of Angkor just by exploring the complex inside and out. Of the dozens of temple ruins, my favorite is Angkor Wat which on my first glimpse, appeared as a giant breathtaking postcard against the sky. 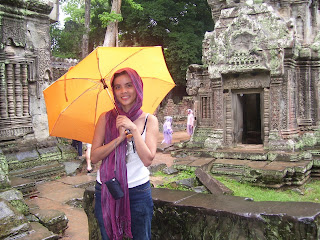 It is both visually and artistically awe-inspiring, with its massive three-tiered pyramid crowned by five lotus-like towers and the finest examples of Khmer art.

I stayed there for almost two hours, admiring its grandeur and magnificence. Inside, in the labyrinthine walkways, I almost heard the gods and demons on the stone-carved walls call each other. It is an experience more profound than I had expected.

AFTER THE SUN GOES DOWN

Aside from the temples of Angkor, there are other things to enjoy in Siem Reap. A visit to the Old French Quarter for drinks and a glimpse of the vibrant night life in the province should be in one’s itinerary.

Siem Reap’s nightlife stretches to near dawn. Backpackers and locals alike fill the bars that are scattered around town.

The pulse of the city at night is felt along Pub Street in the Old Market area. Dozens of bars and restaurants line the street. Those who want to experience the night life can drop by Angkor What? and Temple Club along Pub Street.

Drinkers will enjoy cold Angkor beer which is similar to San Miguel Beer but a little more invigorating.

Siem Reap has colonial and Chinese style architecture in the Old French Quarter.

In some restaurants in the Old French Quarter, one can also enjoy Cambodia’s traditional dance, referred to as an Apsara dance performance.

An Apsara is a character in Hindu mythology referring to a celestial dancer that comes out of the froth as the gods churn the oceans. The dance has a subtle yet ethereal appearance. Dancers are dressed in ornate costumes, usually in gold, silver and red colors.

The Old French Quarter and the Old Market are in the main part of town, in the Psar Chas area.

Cambodian food, meanwhile, will without doubt awaken one’s gastronomic interest. Traditional spicy food and noodles are for the taking as well as a host of salads and many coconut-based dishes. My favorite dishes are red and yellow chicken curry, mixed vegetables and Tom Yam soup.

After a long day of exploring the temples of Angkor, travelers can enjoy a relaxing traditional Cambodian massage. There are spas and massage parlors around town especially near the Old Market.

Let me warn, however, that in our case, we found the massage in the Philippines far better than what we had in Siem Reap. For one, the spas in Manila usually have the better ambience – scented candles, aroma-filled rooms and relaxing music playing in the background.

More importantly, the masseurs massage the whole body with the pressure of your preference. In Siem Reap, the massage that we experienced was limited to the face, arms, feet and a bit of the back.

Siem Reap is also a shopper’s paradise. It is an excellent place to buy Cambodian souvenirs, dolls, handicrafts, bags and original artistic creations. I bought the ubiquitous checkered scarves as pasalubongs to photojournalists back home who find such scarves useful when they are out on assignments.

The Old Market is one of Siem Reap’s traditional covered markets and the most famous shopping mecca. Guides say it offers the widest variety of handicrafts and curios. There are also individual little boutiques scattered around town for souvenirs.

As for me, the experience itself is enough to remember Siem Reap.

I only have to close my eyes and see in my inner mind’s eye the breathtaking view of Angkor Wat set against the crimson painted sky. Ah, nothing could be more pleasurable than to just stand in full view of this man-made marvel, at least when one is in this corner of the world. 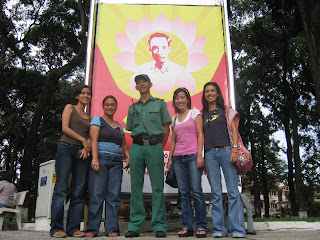 Posted by Iris Cecilia Gonzales at 12:03 AM