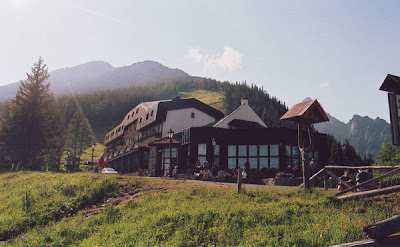 HIGH TATRAS, Slovakia - "You look near to death," my Slovak friend, looking at me squarely, said, then burst out laughing. I wouldn't have taken such an insult normally, but there, midway through the torturous trek, I did feel helpless and out of breath.

We were making our way through Slovakia's famed High Tatras, central Europe's version of the Swiss Alps. I was walking with all my might, gasping for every breath, struggling like an elderly person to make every step.

For someone not known for her athleticism, this mountain trek was one of the most tiring activities I had ever gotten myself into.

With every step, every trickle of sweat and every muscle pain, I thought of just going back, just forgetting about what's up there, and sit and relax in my cottage.
However, a pregnant woman and at least four elderly couples had overtaken me. My pride kept me going.

It was supposed to be a 15-minute trek but it took me more than an hour to make it to the destination. Accompanying me along the way was a swarm of insects, buzzing about my head.

Logging operations, necessary after a hurricane hit the mountains last year, have made the environment a haven for all sorts of tiny flying creatures. This only worsened my discomfort.

But then I found myself on top of one part of the High Tatras.

Some 2,000 meters above sea level, the view of Slovakia is breathtaking. The city of Poprad stretched out towards the horizon as far as the eye could see. Around me was a landscape of snow-covered mountains, spectacular alpine scenery nestled under a clear blue sky and a setting sun.

Up there, high in the mountains, I forgot my aching muscles and deadly thirst. It was the closest I could get to the heart and the spirit of Slovakia.

The city of Poprad, an industrial area, is the main transport center to the mountains. It's accessible from almost anywhere in Slovakia and borders Poland, Hungary and the Czech Republic, making the mountain range a favorite destination of travelers. 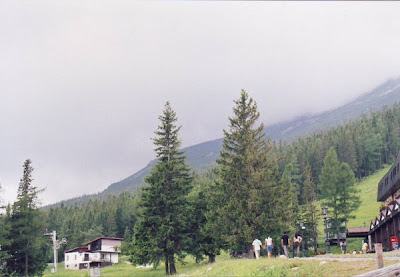 The Tatras mountain range is considered a national park, making it tourist-friendly for all kinds of travelers. Modest but decent accommodations and certified mountain guides are readily available at affordable rates.
Cottages, breakfast included, for instance can go as low as about P700 a night.

Pavol Rajtar, a Tatras mountain guide for 45 years now, told me that a trip to the Slovak mountains would cost about half the price compared to the Swiss, Austrian and Polish mountain ranges.

"There are a lot of cottages and one can go everywhere because there are a lot of different treks. There is a cable car, too. There are 360 kilometers of trails," said Mr. Rajtar, a member of the National Association of Mountain Guides of the Slovak Republic.

Every year, he said the Tatras mountains attract two million people, half of whom are tourists and half climbers.

"It is very popular to climb here because of the treks. We have both [treks] for tourists and expert climbers," he said.

Trekkers, mountain climbers and tourists indeed, abound. Some mountaineers had backpacks that seemed heavier than themselves, complete with sleeping bags and tents. They were going further up the mountains.

The ordinary trekkers and tourists, all panting and gasping, had bottles of juice, water or Kufola, a popular Slovak drink.

Some of the men had taken off their sweat-soaked shirts. One woman, in her 50s, arrived topless, shirt tied around the waist and her bra hung over her shoulders, revealing big sagging breasts.

Some took their respite lying on the grass. Up there, nature trippers and city denizens converged.
Landscape of snow-covered mountains: the Tatras mountain range, a favorite destination of traveler, is considered a national park; breathtaking view of the city of Poprad stretched out towards the horizon.

One man, who had just stepped off the cable car, had a huge suitcase with him, as if expecting a bellboy to be waiting in the middle of the damp wilderness.

After a few hours, I called it a day and walked back. The descent, naturally, was a breeze.
The next day, seduced by the mountain's beauty, I went deeper into the forest. I had no idea what else was there to see. The unknown was at once an enticement and a challenge.

Hours and hours of walking and I found myself in full view of the Tatras waterfall -- crystal clear water tumbled from stark rock walls. 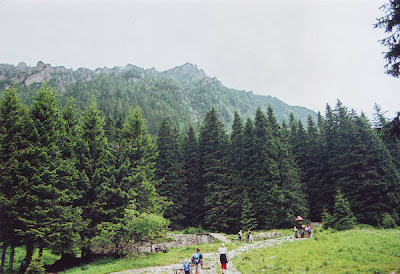 The soft and relaxing sound of the water flowing endlessly to a world below was soothing and almost hypnotizing.

A weekend in the High Tatras was too short a visit for me to see all that it has to offer, but it was enough for me to learn something about Slovakia and its people.

As noted travel writer Pico Iyer once said, "the final destination of any journey is not, after all, the last item on the agenda, but rather some understanding, however, simple or provisional, of what one has seen." 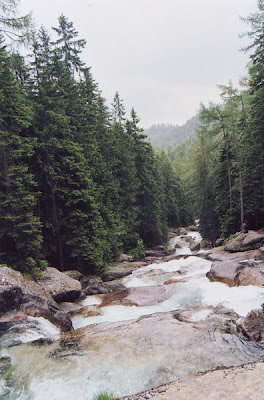 Like the High Tatras, the other parts of Slovakia that I'd seen are untouched and unspoiled by tourism and globalization, despite a swarm of travelers. The spirit of the country is strong and imposing yet warm and welcoming to any visitor.
Posted by Iris Cecilia Gonzales at 10:11 PM