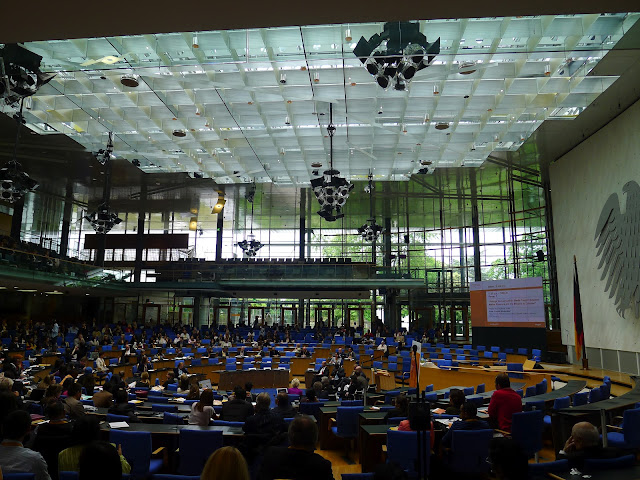 BONN, Germany – Journalists, bloggers, media educators, cultural workers and artists from all over the world gathered in this historic city of Bonn, dubbed as the German United Nations City, for the 2012 Deutsche Welle Global Media Forum.

This year’s forum, a congress with international reach which formally opened on Monday, June 25, aims to examine the role of the media wit their images and messages in a rapidly changing world.

Debates and discussions centered on media’s role in contributing constructively to cultural diversity, education, reducing poverty, addressing the problem of global migration, sustainable development and the overall them of making the world a better place to live in.

Citing a recent study conducted by the University of Hamburg, Deutsche Welle, the organizer of the forum, said that while today’s society is overflowing with information that can be accessed anywhere at any time because of the Internet, approximately 850 million people around the world are still illiterate and that most of these people come from “crisis regions and war zones.”

“Even in a highly industrialized nation such as Germany, 14 percent of the population is functionally illiterate,” Deutsche Welle said, quoting the Hamburg study.

During the opening of the three-day Global Media Forum which ends today, June 27, Reinhard Hartstein, Deutsche Welle Deputy Director General said that people should not have the opportunity to become illiterate with the development of the Internet.

He said media has a role in ensuring this.

“The growth of the world depends also on this. Lacking education cause poverty and social injustices,” he said.

He said the challenge to the media is to create images, make all the things public, and to show these educational and cultural differences.

“The media have to have the goal that they improve educational opportunities,” Hartstein said.

Marc Jan Eumann, State Secretary for Federal Affairs, Europe and the Media of the State of North Rhine-Westphalia, posted the same challenge

“The challenges of the Internet are all challenges for us. Social media and mobile media are all great opportunities for a great variety of thoughts and information. What we need in a global world is pure information,” he said.

Furthermore, he said that education and literacy go hand in hand and a great challenge that media practitioners all over the world have to face.

“The media is an important partner for this process – the process for raising awareness on sustainability issues,” he said.

Keynote speaker Franz Radermacher, Director, Research Institute for Applied Knowledge Processing and Club of Rome Member, spoke on the much-debated issue of media practice around the globe: Ratings Versus Quality: Media Caught Between Market Success and the Mission to Educate.”

He said that at the end of the day, media practitioners need to look for the right balance between these two seemingly opposing forces.

“Look for the right balance in the different aims that you have to follow. And still communicating essential things to a lot of people. Try to concentrate on what needs to be communicated,” Radermacher said.

The forum continued yesterday with a wide range of topics, panel discussions and workshops on journalism practices and media education.

Deutsche Welle, Germany’s international broadcasting company, is tasked to explain Germany’s role as a “cultured European nation with democratic freedoms based on the rule of law and to promote understanding and exchange between cultures and peoples.”  It offers television, radio and Internet coverage in 30 languages.

Posted by Iris Cecilia Gonzales at 3:30 AM