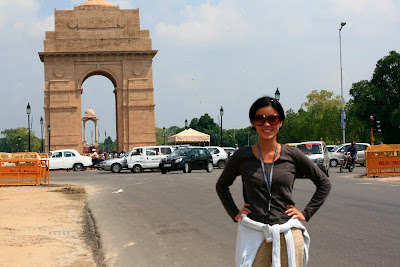 MUMBAI, India - The first time I was supposed to go to India, I ended up going to  London, missing a chance to see one of Asia's exotic places.


I didn't mind the change as London is as European as it can get. Then again, seeing the United Kingdom made me want to see all the more the  former British colony, especially how Britain influenced the architecture, culture and the people of India.

The plane touched down at the Mumbai airport in the dead of night.  Darkness somewhat dampened the excitement of seeing India's most bustling  metropolis.

Yet the dusty roads, pot holes, slum areas, the filth and trash did not escape a first-time visitor's observation.

Day came, however, and Mumbai's charm was seen in full view The  capital of Maharashtra, with all of its 15 million people, is a showcase of extremes.

The rich and the poorest jostle within the city's Victorian fabric -  Mumbai's city center is a reflection of British rule. The architecture of some buildings shows a blend of Victorian and Gothic.

The main commuter station, Chhatrapati Shivaji Terminus, for example, brings back memories of London. Also known as Victoria Terminus, the station is of Gothic architecture. The building has carved buttresses,  spires, domes, and stained-glass windows. Locals say it accommodates half a
million commuters daily.

Another attraction is Marine Drive, which is a long, curved promenade that is also known as the Queen's necklace because of its shape.

It is best to see the boulevard at night when it is dazzling with street lights. Locals say it is one of Mumbai's favorite sunset-watching spots, similar to Manila Bay's.

The Prince of Wales Museum is another must-see for the Mumbai visitor.  Also known as the Chhatrapati Shivaji Maharaj Vastu Sangrahalya, the museum houses India's artifacts and treasures.

No visit to Mumbai is complete without a tour of the Mani Bhavan, Mahatma Gandhi's home in the city. One of India's most influential gurus,  Mr. Gandhi espoused peaceful nonviolence as a means to resolve conflict.

His teachings inspired many world leaders. The house has been converted into a museum and a research center with a library and an auditorium.

Colaba, or the Gateway of India, is probably the most popular of Mumbai's attractions. It is a reminder of the visit of King George V in 1911. It overlooks the sea on one side and the classic Taj Mahal Hotel on the other.

It is bustling with tourists almost the entire day. In the afternoon, it stands out in a backdrop of the setting sun that leaves shades of crimson and orange on the horizon.

Another site that stands out in the evening is the well-lit Muslim mosque known as Haji Ali. It is at the tip of a causeway and can be approached only during low tide.

Sightseeing is easy but not for the faint of heart. Sunjay, who prides himself as one of Mumbai's best taxi drivers, was a classic example of the "madness" of Indian driving.

Like the rest of the mad honking freaks on India's roads, Sunjay's driving was no exception; and while I thought Filipino driving was terrible, it paled in comparison.

The roads seemed to be one big chaos as drivers outraced each other.  The lanes, narrow as they are, seemed to disappear most of the time as drivers changed lanes without batting an eyelash.

On the second day with Sunjay, however, the ride seemed to have become smoother; nothing changed with his driving practice as well as the habits of other drivers - call it assimilation.

Sunjay distracted my thoughts away from the road. He brought me and a fellow Filipino to the best bookstores in town and drove us to the shopping areas.

English was hard to come by with Sunjay so it was majority a sign language with mimicked Indian accent to reply with.

Later on, I realized that not all drivers are the same. Another day of going around town, this time with a chauffeur, proved to be a slow and almost boring ride. I missed the nearly car-chase driving experience from Indian cabbies.

Food and shopping go together in Mumbai. The Jewels of India, one of Mumbai's best restaurants for instance, gave me the energy for going around the city's bazaars, markets and street hawkers.

The prices and products suit all price and age ranges. Shopping at the Taj Mahal hotel, one of Mumbai's popular hotels, was not a all expensive.

Mumbai's contrasts contributes to its charm. It is as cosmopolitan as it can get. There's the glitter of Bollywood, alongside the vestiges of the Empire on one side and the hip and traditional Indian culture on the other, constituting the paradox.

Any visitor will go home with memories of these two faces of Mumbai, plus the vignettes of life - aftertaste of curry and Lasi drink, suitcase of cheap books, a Mehendi tattoo, and ancient Indian body art.
Posted by Iris Cecilia Gonzales at 3:05 AM