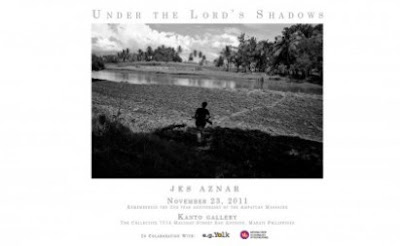 MANILA, Philippines - A photo and multimedia exhibit on Mindanao by documentary photographer Jes Aznar opens on November 23, 2011 at Kanto Artists-Run Space in Makati as part of the activities marking the second anniversary of the Ampatuan massacre.

Under the Lord’s Shadows provides a deeper look into the source of conflict in Maguindanao, the very same conflict that led to the massacre of 58 people, 32 of them media workers, two years ago.

The exhibit is an attempt to tell and retell the story of Maguindanao, a place mired in poverty despite its abundant resources, where men, women and children are constant victims of wars and the conflicts between ruling clans desperate to stay in power. 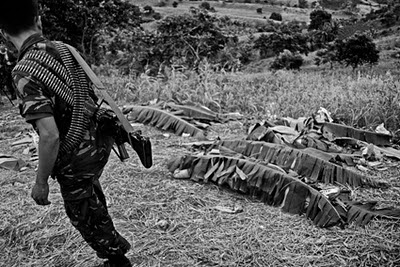 It is part of Aznar’s long-term documentary project on Mindanao, which to him captures the decades-old problems of feudalism, greed and poverty hounding the Philippines.

“What is happening in the rest of the country is happening in the island tenfold. The ruling clans remain in power, living comfortably inside sprawling mansions, surrounded by their very own gun-wielding private armies,” he says.
Armed with just a few hundred pesos in his pocket and a camera, Aznar went to Mindanao some years ago to document this enigmatic and historical island teeming with the complexities of life and suffering, of failure and triumph, of hate and love. A place he now calls his second home.

He has been going back and forth to Mindanao for more than two years now.

What has emerged from his trips is a mosaic about the lives of people living under the lords’ shadows. The lords are the powers-that-be, the ruling clans who spawned wars and conflicts to remain in power. 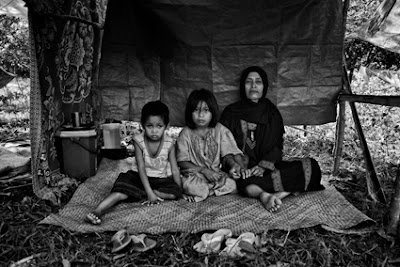 “Mindanao can feed the whole country but the island’s geographical distance from the rest of the country made it easy for ruling clans to plunder its resources and abuse its people. The powers-that-be spawned wars to justify armaments and their slice of the trillion-a-year national budget,” Aznar says.

Aznar has been documenting human rights, land and other social issues in the country for many years now. His works have appeared on various local and international publications including Time, Newsweek, the International Herald Tribune and the New York Times. 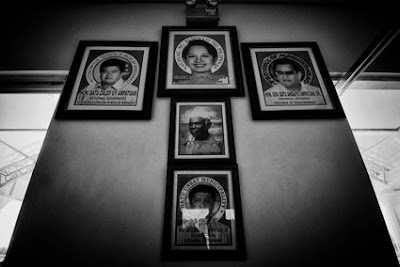 The exhibit opens on November 23, 2011 at 4 pm up to December 7, 2011 at Kanto Artists-Run Space, The Collective, 7274 Malugay Street, San Antonio Village Makati, Philippines.

For inquiries please call +639273572724 or email marangrepublic@yahoo.com
Posted by Iris Cecilia Gonzales at 6:24 AM