What Fucks Us Up

Before Midnight will shatter dreams and fairytales the way real, long-term love does. It shows you what happens when that one true love turns into an asshole or the mayor of "crazy town." "Romance, the notion of a soul mate is what fucks us up," says Ariadni, one of the characters in the film.

The movie elevates the notion of a soulmate or "the love of your life"into a realistic yet higher level: a committed partner who would take you for what you are -- shit and all -- and who would be there to stand by you and with you through the most cruel of times.

It is my story as much as it is yours. It is his, hers, and everyone else's. It is a story of anyone who has struggled or is struggling in a serious relationship, trying to work it out.

It tells of couples' painful, poignant and unbelievable journey from the Garden of Eden to the very real world. Before Midnight is brilliant, melancholic, realistic, tragic, funny, magical and superb. It is also heart-wrenching. Because so is real love.

It is the third and perhaps the best of the three films -- Before Sunrise, Before Sunset, Before Midnight.

It's no longer about being in your 20s, meeting a stranger in the train, falling in love and being swept off your feet before sunrise. Nor is it about being in your 30s, where your heart breaks into pieces and life throws you more than your fair share of disappointments again and again and so you hope to experience that kind of magic again, albeit momentarily, before sunset.

Before Midnight is messier and downright pragmatic but more meaningful and beautiful, too. It's about the possibilities that can happen to two people in love in their 40s, together and individually.

I am far from reaching 40 and if you would have me tested for maturity, you'd see an eight-year old girl stuck somewhere in her parent's room.

But I don't have to think of where I am now.  I am there in that hotel room in that charming Greek Island, struggling like Celine, to be heard above the chaos, to be seen, to be fully understood and to be truly accepted by the beloved for being the hormone-crazy mad introvert that I am. Struggling, too, to live with all the resentment and pain that the relationship has brought me.

To live with the impossible person that he is. To deal with his broken promises -- and the hundreds of other promises that he will make and break in the years to come.

Every half of a couple has his or her own story to tell. Every partnership has its own challenges, complications and bliss. Ours has been worn out by time, battered by our individualities, the passionate and active yet very different beings that we are.

The result is World War III, IV,V,VI,VII and so on. I've lost count of the times I walked out and jumped off the cliff.

Of course, his version of our story would be truly his own. I can imagine the loud sighs of exasperation as he talks about his girlfriend from hell, the most difficult person he has ever encountered his whole life and in his own words, the president of Jessie's "crazy town" where Celine is the mayor. 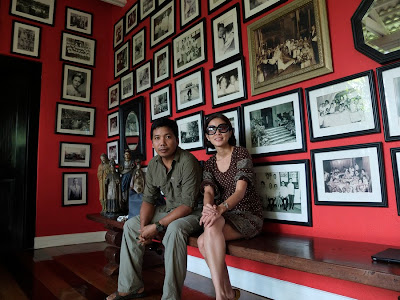 Posted by Iris Cecilia Gonzales at 7:11 AM