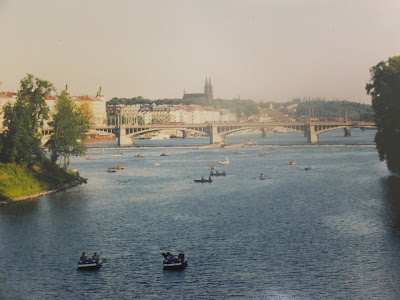 I stood there, by the road,

waiting for a ride.

With one arm stretched out, I did a thumbs-up sign as hitchhikers do.

I prayed to the heavens that a good samaritan would give me a lift.

The wind blowing through my hair and the noonday sun kissing my cheeks, I plastered a damsel-in-distress smile on and gave a pleading look to every driver that passed by.

It was my second day in the Czech Republic, one of central Europe's most historic places. My destination was Prague, the famed capital, some two hours away.

I was standing there on the tree-lined road just across the Nazi concentration camp in Terezin, northwest of the country.

I had just finished an educational but very disturbing visit to the camp, site of the Nazi's atrocities. The 18th century fort is now a tourist area, visited by local and foreigners alike to honor, by remembering, the suffering experienced by the Jews under the hands of the Nazis in World War II. There were worn-out prison clothes, letters to loved ones left at home,
IDs of workers locked in labor camps and other artifacts on display.

After getting a glimpse of its past, I wanted to see the present-day Czech Republic. Armed with enough Czech crowns to help me find my way to civilization and a sense of adventure, I ventured through this central European country.

I had been traveling for several days and had just crossed the border by train from neighboring Slovakia, eager to see more of what Europe has to offer.

In this particular trip, I had taken more Third World-style bus and train rides that I had ever imagined, eaten more unusual dishes than I did before, and plunged into so much more adventure than in previous trips.  I was not about to stop.

The unknown was constantly a challenge and an enticement. I wanted to try, albeit reluctantly, hitchhiking which is a way of life in Europe.

"Hitchiking," my travel companion assured me, "is very safe here."  I was not easily convinced.

But I thought this may be my one chance to try it. Besides, I was not traveling alone. I was with a fellow journalist, a Slovak who knows how to speak Czech.

Throwing my fears away, I closed my eyes, took a deep breath and dived into this adventure. The essence of traveling, after all, is to see, try, taste and do something different.

My anxiety and fear changed into enthusiasm and excitement. I immediately crossed the road and stood just a few minutes away from the bus stop, in a nice spot in full view of passing motorists.

I did the hitchhiker's thumbs-up sign every time a vehicle passed by. I expected to get a ride in seconds, or at the longest, in five minutes.

Seconds turned into minutes, but not a single soul stopped in front to  me.  I tried to fix my hair, put on a wider smile and changed my body language, but to no avail. Nobody even looked my way, it seemed.

All eyes were glued on the road, not on this Asian lass in jeans and a bright orange shirt standing by the road.

My excitement was slowly disappearing, evaporating with the biting cold and the smog from passing cars.

Five, 10, 15, 20 minutes passed and people just drove by, oblivious to the world around them - to hitchhikers like me.

"Hitchhiking is for people with no money but have all the time [in the world]," my travel companion said, sensing my frustration. After 30 minutes, I gave up.

I walked to the bus stop and checked the schedule of the next trip. The next bus to Prague would not be coming for an hour.

My legs were starting to complain. The sun had disappeared although it was still early in the afternoon. The air became crisp and colder.

As if that was not enough, a drizzle started. I put on my raincoat and tried to look for the nearest shelter.

Unfortunately, I was standing by a major highway with no waiting shed nearby.

I may have had the time, but I definitely did not have the patience to wait for a free ride. I started to look for a cab or bus or anything with four wheels that could bring me to civilization. I was willing to shell out extra cash. There were no vehicles.

Just when I was about to give up though, lo and behold, a Volvo unexpectedly stopped in front of me.

He smiled and without hesitation, let us in.  I was pleasantly surprised. I heaved a sigh of relief and took the back seat.

The heavens seemed to cheer up with me.  The dark clouds soon disappeared and gave way to the sun.

My enthusiasm came back. I quickly examined the car and saw a set of golf clubs. Our good samaritan is probably a wealthy businessman playing golf somewhere in the countryside, I thought to myself. He seemed harmless.

I whispered a prayer for a safe trip and started to relax. I buckled up and slouched down in the back seat, enjoying the view.

Rolling hills and a vast expanse of greenery stretched as far as the eye could see. The setting sun, a fierce round crimson ball, sat perfectly on the horizon.

Smoking a stick of Davidoff, the gentleman drove leisurely.  "Where have you been?" he asked us.

It was the start of an interesting, often humorous, two-hour conversation, mostly about each other's travels and adventures into different corners of the world.

Paul, as he introduced himself, was a doctor who had gone to the countryside to play golf. He lives in Prague, just near the central bus station where we could easily get transportation to the different parts of the Czech capital.

The car passed by at least three more hitch-hikers. One had a backpack that seemed heavier that himself. Hitchhiking, Czechs would later tell me, is common in Europe. It is usually safe but not always easy. One can wait for as long as six hours and still not be able to get a ride. It is for people who just go to where the road takes them.

"It is easiest for women hitchhikers to get a ride," a female Czech journalist said.

Time passed quickly and we soon found ourselves in the capital city of Prague. We said goodbye to Paul. It was a pleasant meeting of strangers, a testament of the warmth of humanity.

I don't know if I will ever bump into him again, but I will surely remember him as the stranger who gave me a free and safe ride in my first hitchhiking experience. 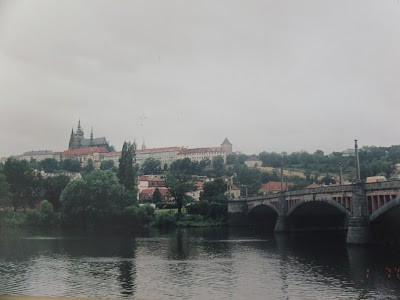 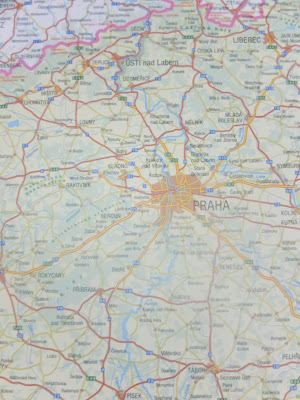 *lost and found article. BusinessWorld, 2005
Posted by Iris Cecilia Gonzales at 2:50 AM