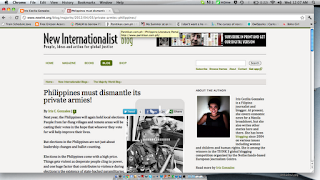 Philippines must dismantle its private armies!

Next year, the Philippines will again hold local elections. People from far-flung villages and remote areas will be casting their votes in the hope that whoever they vote for will help improve their lives.

But elections in the Philippines are not just about leadership changes and ballot counting.

Elections in the Philippines come with a high price. Things get violent as desperate people cling to power, and one huge factor that contributes to violence during elections is the existence of state-backed paramilitaries.

And the gruesome 2009 Ampatuan Massacre happened exactly because of that.

Two years ago, on an ordinary Monday morning, in a province they called home, some 58 people were massacred in what would be the most gruesome election-related violence in the Philippines in recent years.

The New York-based Human Rights Watch has said that it is important for President Benigno Aquino III to ban all paramilitary forces in the Philippines because of their long and continuing history of serious human rights violations.

Furthermore, the group said that abuses by these paramilitary force members are rarely investigated or prosecuted.

‘President Aquino’s promise to dismantle “private armies” is a necessary step to end election violence in the Philippines. But he should go further and disband the state paramilitary forces that are frequently as abusive,’ said Elaine Pearson, deputy Asia director at Human Rights Watch.

The Philippine president that the police have already ‘neutralized’ at least 28 private armed groups, as of June 2011.

For its part, Human Rights Watch urged the police to publish the full list of private armies and explain what steps have been taken to address state involvement in these groups.

‘Elections in the Philippines are often bloody, with the violence mainly carried out by warring political factions with the support of private armies and state-backed paramilitaries,’ the group said.

Human Rights Watch also notes that paramilitary groups are formed not just for elections but also for mining companies and against the communist New People’s Army.

The human rights violations committed by paramilitary groups are grave but often ignored by the state, leading to a culture of impunity.

Because of this, the group said there should be a systematic disarming of all these private armies.

‘Dismantling private armies should be more than a PR exercise,’ Pearson said.

‘The failure to address paramilitaries as well as private armies puts political opponents and ordinary civilians at continued risk from powerful local politicians.’

Indeed, only with the abolition of private armies can the people score in the fight against impunity.
Photo of a Filipino solider by Jayel Aheram under a CC Licence.
Posted by Iris Cecilia Gonzales at 9:07 AM