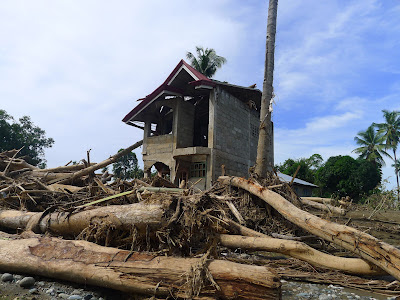 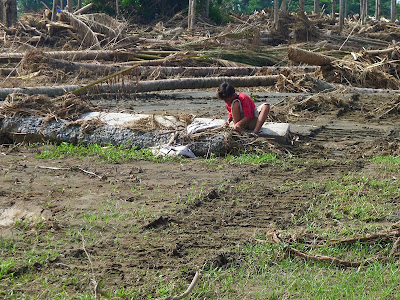 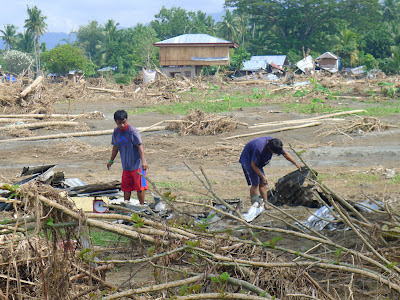 BAYUG ISLAND, Iligan City – For the skies, it was just another spit of rain, perhaps just stronger than in previous days.
But for people whose lives are shared with loved ones and are measured not by routines of Mother Nature but by family ties and relationships, the rains were a curse. A curse so mad, merciless and unforgiving.
And that curse is seen everywhere here in Bayug Island: devastated houses, coconut trees; shattered windowpanes, slabs of remaining concrete, crushed roofs; clothes; wooden dressers; sofas; refrigerator; photographs; mattresses.
The island, traditionally considered as the first settlement in Iligan, has now become a desolate land that breathed its last breath that fateful Friday night when waves, as if furious, came and pared off hectares and hectares of Bayug’s villages.
Located at the mouth of Mandulog River, the island has an estimated land area of 300 hectares, home to some 400 families scattered around 8 sub-villages.
Now, large portions of the coastal village are barren. There are only makeshift altars assembled out of left over pieces of wood, for candles and flowers for the dead.
Most of the survivors have sought refuge in cramped evacuation centers – public schools turned temporary shelters or tent cities donated by aid agencies.
Danny Gongob is among those who survived. But he lost his wife and two children.
I met him a day after Christmas Day, standing on a small square of concrete where their house used to stand, where the family used to live, where he slept with his wife and children every single night; where they used to spend Christmas Days together.
Now, there is nothing but a makeshift altar with a flickering candle and a bunch of pink and white flower petals for his missing loved ones.
And their dark red Spongebob mattress covered with the thickest mud, which he found a few meters away.
It was very dark when the storm came that night, he says. The grip of the waves was strong and howling, drowning the sounds of children who screamed for help.
But for Danny, there’s no time to grieve too long. He is back in Bayug only for a brief moment, as he will be going around the city and nearby villages in search of his wife and children.
Dodo Nagayag, another survivor, lost his mother and three siblings but he, too does not have enough time to weep.
To survive, Dodo must salvage whatever pieces of scrap metal left of their house and their neighbors’ too.  He will sell this for ten pesos a kilo.
With bare hands and some stones and slabs of concrete, Dodo tries to pull out from the rubble whatever rusty metal bars he could find and even the iron sheets crumpled by the waves.
Photos by me
Posted by Iris Cecilia Gonzales at 3:43 AM