Because Women Hold Up Half the Sky 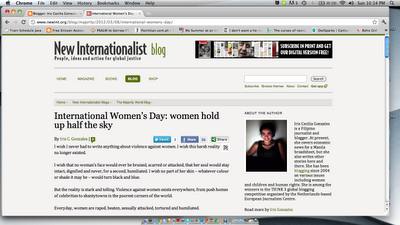 International Women’s Day: women hold up half the sky

I wish I never had to write anything about violence against women. I wish this harsh reality no longer existed.

I wish that no woman’s face would ever be bruised, scarred or attacked, that her soul would stay intact, dignified and never, for a second, humiliated. I wish no part of her skin – whatever colour or shade it may be – would turn black and blue.

But the reality is stark and telling. Violence against women exists everywhere, from posh homes of celebrities to shantytowns in the poorest corners of the world.

In Pakistan, countless women are suffering from acid attacks. Their lives are shattered forever.

In Kuwait, just three weeks ago, a Filipina worker was raped and beaten. She was on her way home one night when two men who pretended to be police officers dragged to her to a tent in the middle of the desert and took turns raping her.

Not even her monthly menstrual period prevented the men from forcing themselves on her.

She was raped from behind and it hurt like hell, she narrated.

Here, too, in the male-dominated and macho Philippine society, violence against women exists.

A female journalist tells of how her husband would try to beat her every time they had a fight.

Once, to make her shut up, her husband – who weighed twice as much as she did –  forced a cotton shirt inside her mouth.

Another time, she had to literally crawl out of her house to call out to strangers to bring her to a government hospital.

The wife of a Filipino politician jumped off a building and took her own life. She was a battered woman.

The trauma and stigma that sticks to the victim of sexual violence or physical attacks stays for a long, long time, if they ever go away. Some women never recover. Others just lose it and go mad.

The stories go on and on. The names are different but the plot and the pain are nearly the same.

I write this in the fervent hope that violence against women – in whatever shape, size or form; in whatever magnitude or strength – will cease forever.

I hope that no women will ever suffer the trauma and humiliation of being hurt, attacked and violated. I hope that each and every woman in this world will be spared injuries brought upon her by another human being.

I write this because I believe there is no excuse for one person to take another’s life or to deliberately hurt and violate another person.

I write this on International Women’s Day to honour the brave women out there who have been victims, or continue to be victims, at the hands of their perpetrators.