Remembering Paris (and the bus ride to Italy) 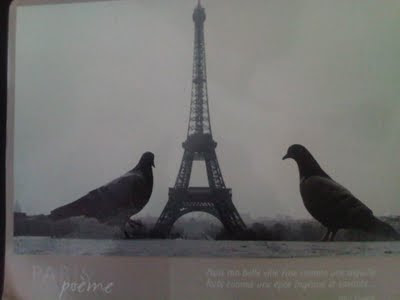 I received a postcard from Paris and memories of the enchanting French capital just came pouring back. I visited Paris in 2004 but I can still see in my inner mind's eye the breathtaking beauty of the place.

Everything is a feast for the senses -- from its "good food, beautiful buildings and different way of life," as my cousin wrote in her postcard.  Below is the travelogue I wrote during my visit.

PARIS, France - It was the best ride of a lifetime, a bus trip second to none.

Most tourists take the plane or the train, but at some point one has to be different and take the road not yet taken - at least in exotic Paris wanting to see historic Rome and to experience the sweetness of life it promises.


It was not the most convenient way to travel from France to Italy, but it was the best way to see Europe.

The ride started in Paris, a city one seems never to get enough of.

There is just too much for the senses to absorb.

There are two ways to experience Paris on a weekend, through a tour bus or  through the metro - the practical choice. There is no complication in  the Paris underground with all the signs on the train and the stations.

An early morning trip to the Eiffel Tower, Paris's famous landmark, is a must to avoid the hordes of tourists who want to get a glimpse of the man-made marvel.

The tower, an immense iron structure built in 1887, never fails to impress those looking for magic. The view from the top is as majestic as taking the picture of the first morning of spring.

There's so much to see, for the eye to transmit to the brain - buildings, bridges, and the churches seem to metamorphose into a collage of fine architecture that extends out to the horizon.

An observatory, situated on the first level of the tower, 189 feet from the ground, provides people a venue to study what seems to be a living iron structure because of the movement of its high point.

Day or night, Paris comes alive from this towering height. For those who want to listen to side stories, it was on this level where Gustave Eiffel welcomed Thomas Edison in his office.

Then there's the Louvre, which has lately become a point of pilgrimage for people who read and were convinced of Dan Brown's Da Vinci Code. Seeing the Mona Lisa and trying to decipher the supposed mysteries behind the painting has become an attraction of the Grand Louvre.

The more than 15,000 visitors who come to the museum has become a mix of art lovers and mystery fanatics.

Not far from the Louvre is the Notre Dame cathedral, a Parisian treasure that inspired Victor Hugo to pen the story of the gentle and kind Quasimodo, whose crime was to have been born deformed but whose heart proved to be a thing of rare beauty when he saved the beautiful Esmerelda.

For those with cash and a high credit limit, business blends well with culture in Paris to feast on fashion and haute couture. While one can feed vanity with designer clothes, one can also feed the soul with the finest of art, music, and literature.

At the Shakespeare and Co. bookshop, for instance, there was Pablo Neruda idly sitting with Gabriel Garcia Marquez and Truman Capote on the wooden shelves, while the bookkeeper, a guy from Dublin, played Mozart, serenading lovers of books and wisdom, only to drop the violin to press the cash register.

Then there's the food at cafes where everything was as French as the French. People come for much more than a glass of red wine.

Then it was time to board the bus to another land of magic and adventure.

It was 5 p.m. and the sky was as clear as the surrounding countryside of rolling hills, old villas and vineyards. There was no stopping sleep from opening one's mind to dream of other places, of the homeland, and of what awaits at the end of the journey.

The horizon seemed so near as the bright orange ball started to set somewhere beyond one's reach. The other pilgrims started to doze off as the bus crossed into Italy in the middle of the night.

At dawn, the weary travellers reached Bologna in Italy. The city is refreshing with its seemingly monotonous but admirable architecture. The marbled pavements make walking a welcome respite.

Piazza Maggiore, a wide pedestrian square surrounded by the city's medieval and renaissance buildings, bustles with tourists and merchants.

But there was no time to explore its secrets.

The journey must go on. One has to move forward into Florence then Milan, with its cobbled stones, age-old buildings, and churches. Yes, there are churches everywhere.

"Milan is a city like no other in Italy," a fellow bus passenger said. Milan is quintessentially Italian. People visit the church of Sta. Maria delle Grazie not necessarily as devout believers but to wonder at the beauty of the place as merchants hawk bags and leather products they claim to be "Italian" on street corners and parks. Milan is the starting point for a sojourn to Venice.

The main destination, however, is further ahead - Rome. Rome, the eternal city, is the end of a long cross-country bus trip and the beginning of a new adventure.

Seeing for the first time the eternal city was beyond what was expected. Roma, non basta una vita (Rome, a lifetime isn't enough) is more than accurate. The monuments, churches, palazzis, bridges and fountains built and designed by Michelangelo and Bernini capture the sight.

Curiosity, awe and faith follow, especially after a walk around the Vatican. The bus or train are options, but there seems to be no better alternative to walking at the seat of Roman Catholicism.

A day is not enough, maybe even a lifetime, to contemplate the beauty and mystery of a city, the smallest independent state and the seat of a religion whose faithful count hundreds of millions worldwide.

Piazza San Pietro is a masterpiece. In the middle is Bernini's square, a melting pot of pilgrims and a haven of tourists. At least 140 statues of saints sit on two semicircular colonnades, which are made up of four rows of columns.

Saint Peter's Basilica was a work of art that holds a vast collection of treasures. One can also spend the whole day under Michelangelo's dome, an architectural gem that soars 119 meters above the altar.

It was a rare moment to be in the Vatican during the Pope's birthday.  Thousands of people, not everybody necessarily Christian, gathered at the Basilica, unmindful of the heat of noon. It was a once-in-a-lifetime experience for many to see the Pope, listen to his message and even raise a rosary or two to be blessed by the Pontiff.

Like any other city where culture, religion and commerce coexist, the city center, surrounded by relics of ancient glory, is a paradise to walk around for hours.

How can one describe the fountain of Trevi, a crowd-drawer, without plagiarizing the best of writers who once might have been enamored by its history? The high-baroque fountain was built in 1732. Aside from its aesthetic value, is the belief that if one tosses a  coin into the fountain, a return trip to Rome is assured - if not by faith in the ancient gods or the intercession of Christian saints, then by the accumulated mileage from foreign trips.

The Colosseum is a must-see. The structure that is supposed to seat more than 50,000 spectators to watch gladiators. Its outer walls have three levels of arches and columns.

Then there's Santa Maria Maggiore, one of the patriarchal basilicas, which was built in the fifth century. The main facade stands out in the evening because of its light effects.

Going around Rome would not be complete without a visit to Piazza de Spagna, site of the Spanish Steps. It has become a gathering place for visitors and a meeting place for Filipino domestic helpers during their free time to exchange news from back home. The structures at the piazza were built in 1725 and the Steps were named after the Spanish claim of the area, especially when it built its embassy there.

Ironically, the Steps, which are decorated with pink and red flowers in April and May, lead to a French church.

After all the walking and like any first time visitor to a foreign land, one ends up looking for a place to eat and shop. There's no lack of shopping area in Rome - stylish clothes, shoes, leather items, bags, silk, shawls, knives, religious souvenirs like rosaries, prayer booklets, paintings, and porcelain.

And one cannot leave Italy without trying the pasta and the pizza, so they say. For dessert, there is the gelato, an ice cream Filipinos in Rome are fond of.

There is so much that Rome has to offer, from food and wine to churches and fountains, the la dolce vita (the sweet life) experience in the eternal city.

It was the best ride of a lifetime. It was a trip second to none. It was a moment in life when one made a difference, going through the road not taken - be it by bus or train.
Posted by Iris Cecilia Gonzales at 10:15 PM