My latest story for Womensenews.org

Being both mother and father to the children is difficult, says an unemployed man whose wife works as a domestic helper in Dubai. The feminization of migration leaves more families affected by what one researcher calls the commodification of motherhood. 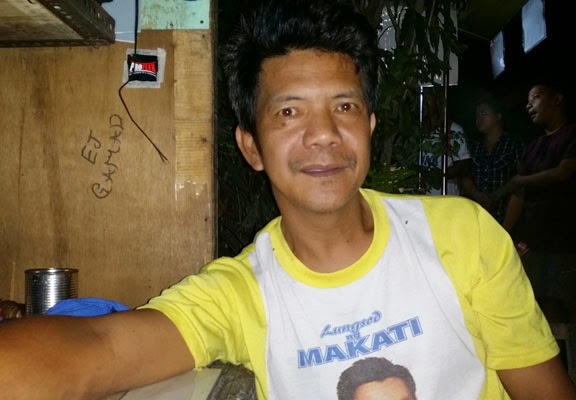 Jimmy Gamad; his wife works as a domestic helper in Saudi Arabia.
Credit: Photo by Iris Gonzales
MANILA, Philippines (WOMENSENEWS)-- Maria Juliana, 4 years old, is crying and whining; her nose is now runny and her voice hoarse. It is 7 in the evening and she hasn't had dinner. There's no food on the table yet. She is tired, hungry and fussy now. And she is calling out to her father.But 52-year-old Edgardo Agido is checking on Maria's sister, 7-year-old Samantha Nicole, who is still out playing hide and seek with the neighborhood gang under the moonlight.

Agido and his children live in the outskirts of the University of the Philippines, a state-owned school in the northeast of Quezon City. Their neighborhood is a labyrinthine slum where families crowd into dwellings that are made out of concrete or a hodgepodge of plywood, cardboard and whatever else can be found.

Agido's eldest, 9-year-old Albert, is helping in the kitchen.

It's a typical night. It can be chaotic at times, says Agido but he's the only one in charge for the past year, since his 34-year-old wife Melona left for Dubai to work as a domestic helper.

"I couldn't go. I'm already over age so my wife had to go," he says. Agido used to work for a water distribution company but he was dismissed after a change in ownership. He has filed an illegal dismissal case, which is pending with the courts.

Being both mother and father to the children can be difficult. And lonely, he says. "It's really very sad because my wife is not around."

Gathering the children for dinner is a breeze compared to when they are sick. "Sometimes, when one of the them is sick, it can be so stressful. I would especially wish that my wife was around," he says.
Melona Agido is part of a global trend, writes Zuhal Yesilyurt Gunduz, associate professor in the International Relations Department at TED University in Ankara, Turkey, in a recent paper on the feminization of migration. "In the past it was mainly men who went to countries far away; women came as followers. In the last 20 years, however, this has changed so much that today over half of all migrants are women."

Gunduz notes that female migrants are often the main or sole wage earners of their families.

As a result, millions of children of migrants are forced to settle for what Gunduz calls the commodification of motherhood. "A generation of children has grown up without their mothers at their sides. The consequences of long separation periods, especially in very young ages, can be devastating," she writes.

Global social and demographic trends in developed countries, such as aging populations, are driving the feminization of migration, Gunduz writes.

And Filipino families are particularly affected, she notes. "Not only do many employers explicitly seek foreign women, specific nationalities are often sought-after, such as Filipinos."

Domestic workers from multiple countries are at U.N. headquarters in New York to push for adoption of international labor standards and labor projections for domestic workers during the March 9-20 annual assembly of the Commission on the Status of Women.

But improved labor standards won't necessarily help the children left behind.
"Studies reveal that migrants' children are ill more often than other children; they experience resentment, bewilderment and indifference more than their friends, who live with their mothers. Here we notice injustice at work, linking the emotional deprivation of these children with the surfeit of affection their First World counterparts enjoy--at least ostensibly," Gunduz says in her paper.

In the case of Agido, the family had no choice. "I couldn't find a job here or abroad so my wife had to be the one to go," he says.

Jimmy Gamad, 49 years old, who lives in the same neighborhood, is luckier. He says his children, who are older, do not feel any resentment toward their mother who is in Saudi Arabia working as a domestic helper.

"I think my children are fine. With the help of technology, they are able to talk to their mother," he says. His wife Emma left two years ago.

"We are able to talk to her on Skype so it's OK," says 24-year old Marc Jay, the second of their four children.

Their father works as a cook in a school canteen and goes home right after work to check on them.

"He is both father and mother and he is really the best," says Marc Jay.

Gunduz, of TED University in Ankara, says migrants should have a right to family life and to be reunited with their children.

"[I]t is necessary to struggle to guarantee the right of children in all situations to be with their mothers (not to exclude their fathers as well) so that they can share family life again even while the mothers are working," she writes.

An estimated 10.48 million Filipinos worked overseas as of the end of 2012, an increase of 33,000 from a year earlier, according to the latest available data from the Commission on Overseas Filipinos, the agency tasked to promote and uphold the interests of Filipinos abroad.

Authorities recognized the struggles faced by Filipina migrant workers, especially mothers who are away from their children.

Imelda Nicolas, head of the Commission on Overseas Filipinos, says Filipina migrants face the triple burden of being female, foreign and often working in low-skilled jobs.

"All these, unfortunately more often than not, translate to exploitation, abuses, dysfunctional families," she said in a speech earlier this month at the Ateneo de Manila University.

The government, she said, will continue its thrust to create jobs at home and make working abroad a choice rather than a necessity. "When Filipinos do choose to work or live abroad, their welfare and protection should still be our priority," Nicolas said.

For international migrants' group Migrante International, the feminization of migration among Filipinas boils down to a weak domestic economy that doesn't offer enough good jobs. The unemployment rate in the Philippines stood at 6 percent in the fourth quarter of last year, according to the Philippine Statistics Authority. Among unemployed people, about 65 percent were males.
Garry Martinez, chairperson of Migrante, says many overseas employers prefer women because women are paid less.

And it's equally hard for the children.

"They miss their mother," says Agido.


Iris Gonzales is a journalist based in Manila, the Philippines, who writes about economics, development and humanitarian stories. Some of her work may be read at http://www.irisgonzales.blogspot.com and http://www.roadtopuka.com.