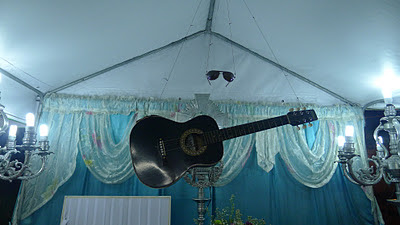 This is a story of survival; of simply joys; of laughter; of tragedies; of overcoming one’s disability or weaknesses; of growing old; of songs belted out from the heart. But most of all, this is a story of real love and togetherness; of taking life’s punches holding hands and of having someone to share one's life with.
Mang Rudy and me
By Amy Marcelino as told to Iris Gonzales
It was in the pre-departure lounge of the Cebu airport where I met him. The year was 1985. He serenaded passengers waiting for their flights or offered to massage their sored muscles. I sold them candies and other pasalubongs to take home.
We would talk in between flights or when passenger traffic is light.  He didn’t want to marry.  He said women would only break his heart. The altruistic ones would only be attracted to him out of pity, he believed.
But his biases and fears disappeared with the last plane that departed on the day we left Cebu. It was the end of our work in the airport but the beginning of our life together.


The GROs loved his voice. They would always ask him to sing, Maging Sino Ka Man. On good nights, we made P3,000.
He got sick. We spent the holidays at the ward of the East Avenue Medical Center.
He is gone now. I’m not sure if I’m going back to our rented room. I still don’t know. Actually, I don’t know where to go.
(Photo by Jes Aznar)
Posted by Iris Cecilia Gonzales at 7:17 AM