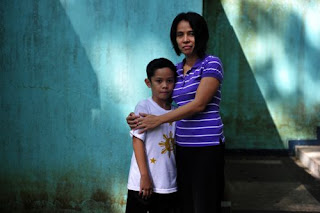 A voice quivers. And another. There is a cry. Others fight back tears. A blanket of silence hangs above. They take a deep breath and in soft voices, they speak again, taking turns to share their stories.

In a small thatched hut, some 20 women are gathered on a hot Saturday morning. In contrast, there is nothing warm about the experiences they share. Courageously, they talk of the cold nights when they had no choice but to embrace their grief.

These women are of different ages and they are as varied as the provinces they come from. Some prefer cherry red lipstick; some wear light pink shades. Others have no make-up at all. Some manage to laugh a lot while others try to conceal the pain, but their blank stares betray them.

Varied as they are, they have one thing in common. They are all widows of journalists murdered brutally in the Philippines, a country where the press is supposedly free.

They are gathered in a government-owned resort in the forests of Mt Makiling, a famed mystical mountain in the southern part of the Philippines, for a three-day summer workshop aimed at helping them recover from the deep trauma they experienced.

Organized yearly by two NGOs – the National Union of Journalists of the Philippines (NUJP) and the Children’s Rehabilitation Center – this year’s workshop is funded by the Media Entertainment and Arts Alliance of Australia, a union of journalists and artists in the Asia-Pacific country. The workshops included art and writing activities, theater and sharing sessions.

In this thatched hut, the women, guided by a psychologist, are asked to explain the colored drawings they made the day before. They were asked to draw how they felt since the tragedy.

Gemma Damalerio, whose late husband was killed in cold blood in 2002 under the yellow sun in the streets of Pagadian City, in the southern part of the Philippines, said she did not go out of her house for two years.

‘I would not even go to the grocery. I didn’t go out. I simply refused to get up,’ says Gemma, a tall, slender woman who is a mother to a four-year old boy. Gemma says that after a while, she mustered the courage to get up and move on with life. However, the struggle to recover from losing the only man she loved is no walk in the park, she says. ‘It’s very difficult,’ Gemma says, fighting back tears.

She’s been feeling somewhat better for the past two years, having found the energy to stand up and earn a living. On her bond paper, she drew a house and colored it green, saying that she has decided to GO on with life.

Brenda Ramirez is 38 years old. She has short curly hair, dyed light brown. Her husband, a television cameraman, was shot dead in 2003. He was the love of her life, says Brenda, and the only life she ever knew.

‘I’ve been a housewife all my life. I did not know how to survive without him.’

Eight years on, Brenda says the pain still stings. A mother to a 10-year-old boy, Brenda has no choice but to stand up on her own. ‘I have to earn a living.’ She now works freelance as a salesperson.

She has found strength in the yearly workshops knowing that there are other women who are going through the same difficulties and are also struggling to survive the pain.

Hope never withers for her, no matter how difficult.

She may even fall in love again someday, says Brenda, her eyes both sad and sparkling at the thought of it. ‘Of course, I want to love again,’ she says as she explains the little red heart she drew on her bond paper.

May Rodriguez, NUJP director who heads the project, says that the next painful thing after having one’s loved one killed is to keep all the grief to oneself. ‘So the workshop is a way they process their grief,’ says Rodriguez. She notes that in the early years, the widows had so much pent up grief. ‘It was very intense and emotional but I’m happy they are now able to smile.’

Brenda is looking forward to a better and happier life ahead. ‘I know there will be more colorful drawings next time. Who knows, I may marry again,’ she says in jest and lets out an excited laugh. The group breaks into laughter as well, sharing her excitement.

Finding strength in each other gives these women hope. They are indeed a brave lot, turning their pain into courage and inspiration.

I am in awe at their strength and I am certain that in the years to come, the drawings will be more colorful and happier, each shade a reflection of a woman’s unbreakable spirit.