(Ordinance has been put on hold; public hearings are still ongoing)

Want safe sex? Get a prescription

In this posh village, a single house can be as huge as a shantytown elsewhere. The number of cars in one house can go as high as the number of days in a calendar or even more. Domestic helpers abound too, wearing their creaseless uniforms.

Welcome to the Ayala Alabang Village, the country’s classiest and most exclusive subdivision and home to billionaires, politicians, celebrities, and yeah, even their mistresses.

But the wealth that characterizes the village is apparently inversely proportional to the common sense and logic that runs in the minds of the village officials.

Recently, the village has issued an ordinance requiring residents to get a prescription before they can buy a condom. 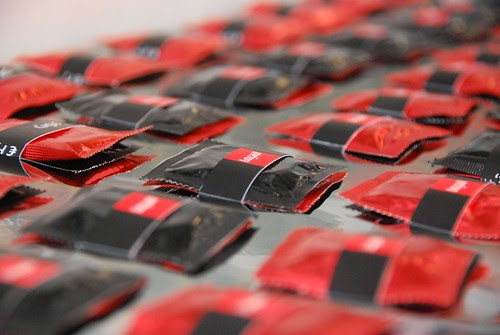 Photo by Paul Keller under a CC licence.

Opus Dei members are behind the ordinance. There is a high number of Opus Dei members living in this posh subdivision and they are the same people vehemently opposed to the pending Reproductive Health bill. This legislative measure promotes birth control methods that are medically safe and encourages couples to adopt the family planning method they want.

The Catholic Church in the Philippines, this predominantly Catholic country, is opposed to the measure.

As if the condom prescription wasn’t enough, the ordinance also prohibits teachers and health workers from conducting activities in the village that aim to educate children on sexual reproduction.

Authors of the ordinance say they are regulating the sale of condoms to discourage pre-marital sex.

To say that this thinking is primitive is an understatement, especially in this day and age when government statistics show that the number of persons with HIV has increased tenfold in the last four years.
There were only 44 Filipinos with AIDS in 2006, but last year, the number of infected persons grew to 489.

Fr Joaquin Bernas, an influential Filipino priest, constitutionalist and dean emeritus of one of the country’s law schools, said the ordinance comes from a ‘sector of the Catholic Church to instrumentalize the power of the state to impose Catholic belief on all others.’ This is something that gives the Catholic religion a bad name.

In an article posted here, Bernas says that the authors ‘will say that they are not prohibiting the use but merely regulating the sale. But they insult the intelligence of villagers by thinking that the Alabang residents are village idiots who do not have enough brains to see the truth behind the pretense. One does not have to be a genius to understand that the curtailment of sale is intended to prevent the use of what is sold. And therein lies the gross offense.’

First time violators of the ordinance will be penalized with a P1,000 to P5,000 fine while second time offenders will be slapped P5,000 plus jail time.

This also drew the ire of Bernas.‘Only a real court and not a village kangaroo court or vigilante may impose criminal penalty, and only after trial,’ he said.

I agree. At the end of the day, women are the ones who have the right to their own wombs and not anybody else. And especially not some rich people imposing their religious beliefs on others.