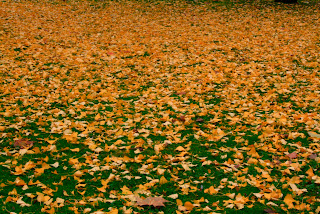 (I scribbled this piece while waiting at the Dusseldorf airport for my flight back to Manila but had no time to upload it then.)

GERMANY - A visit to this European country has always been on my bucket list -- albeit somewhere at the bottom -- but still there.

So when my editors assigned me to join a study tour and cover a press conference here, I didn't have second thoughts. I accepted. I didn't even care what the assignment was. Whatever it was, I knew I could pull off something. Even if I were to search for Hitler's descendants or compete with the journalists around the world to cover the 20th anniversary of the Berlin Wall, I would without doubt, take the assignment. It would be my ticket to Germany.

And so I left Manila at midnight for the long plane ride to the western part of the world.

Germany, here I come. I was beaming with excitement and not even a temperature of four degrees would dampen my spirits.

After more than 15 hours on an economy flight, I made it here. I rushed out of the Dusseldorf airport to realize the dream I had for a long, long time.

Like most dreams I had, however, there's that momentary rush you feel when you realize it. And then, the exhiliration disappears, blown away by the autumn wind just like the dried cherry color leaves.

That's the downside...You'd think...ok so it's done...what now? That big constant dream is suddenly demystified. There's nothing more to look forward to. It's crossed out. Over.

There is that yearning to go home soon. Suddenly I missed home like I never did in absolutely every out-of-the-country trip I had since I was 13 years old.

This is not to say I did not enjoy. Sure I did. Germany did not disappoint. It is as European as it can get -- old churches, castles, different dishes, German beer, good wine and cheese, chocolates, interesting people, efficient train system, the breathtaking view of Koblenz along the Rhine Valley from the train, the football stadium and many, many more. 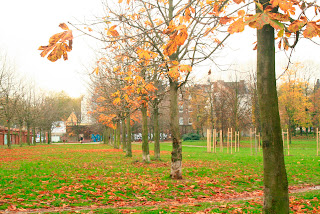 The coverage, too was interesting enough. The usual corporate blah-blahs notwithstanding, I picked up enough interesting points. I was happy talking with fellow journalists from other countries, learned from them, drew inspiration from the older ones and enjoyed the interviews, too.

I even had the energy to extend my stay for several days to go backpacking to other parts of the country with some friends. And I certainly had a good time especially with all the festivities during a very historic period.

So what was missing?

I am waiting here at the airport trying to figure it out.

And then a mother with a baby girl in her arms appears from nowhere. The girl, probably two years old, has curly, golden hair. She has freckles on her rosy cheeks. The mother carries her with her right hand and pushes a stroller with the left hand. She doesn't seem to mind the load. They laugh over something. The baby girl claps her hand.

My thoughts drift back home. I can't wait to board the plane. 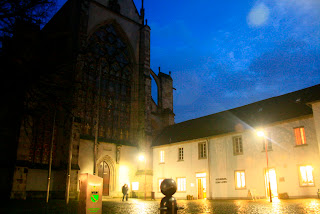 Posted by Iris Cecilia Gonzales at 9:11 AM