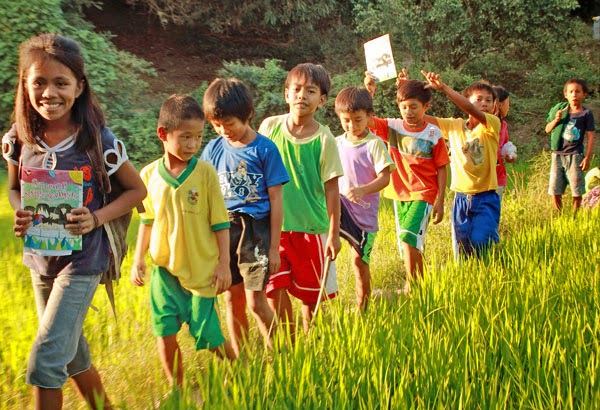 Stories of giving are all around us -- from a stranger in the street or a loved one.  For several days now, The Philippine Star has been publishing such stories under its #28StoriesOfGiving project.

I am honored and privileged to be able to tell some of these stories. They are stark reminders that in a world full of selfishness, selfish individuals, self-righteous people who can only rant and complain and thieves who rob the desperately poor,  there are still a few good altruistic souls out there.

Hats off to these great men and women! Let us support them in whatever way we can.

Below is my latest story under the #28Stories: Journey of a Thousand Miles. Thank you to Rey Bufi for sharing your story with me. I am deeply honored.

Journey of a Thousand Miles
by IRIS C. GONZALES


In a country where things often don’t work, institutions fail or the government falls short of doing its job, a 31-year-old philosophy student opts to do what he can rather than rant and do nothing.

“If you have something good to share, share it because these small acts of kindness may inspire people to do good. If you just rant, nothing will happen,” says Rey Bufi, founder of The Storytelling Project.

The project is a volunteer-based reading advocacy focused on kids in remote communities, with the aim of instilling in them a passion for learning and a love for reading.

Bufi did not conceptualize the project overnight. It came from his experience as a student of philosophy.

“As a philosophy student in college, I had a difficult time reading,” Bufi told The STAR. He had tons of reading assignments and initially had a hard time coping.

This was because he was not an avid reader. Though a little late, he realized that to become a reader, one just has to read and read.

“If you want to be a reader, all you have to do is to read, read and read,” says Bufi.

With this in mind, he thought it would be good to help Filipino children become readers while they are still young.

The idea of a reading advocacy project firmed up when he was with Smart Communications, which conducted the Read to be Smart storytelling project in different areas around the country every year.

He started volunteering as a reader and decided later on to come up with his own project.

Together with like-minded individuals, Bufi started The Storytelling Project. With volunteers, proponents went around the country, coordinating with public community schools and trekking to far-flung villages to read stories to children.

The project consists of three phases, with the first phase consisting of a 21-day storytelling program. Each session lasts from one to one-and-a-half hours.

“We read to children everyday. These are mostly Grade 1 and 2 students,” he says.

The books they use are mostly Adarna books. Many of these books are written in English and Filipino and focus on topics that children can relate to, such as self, family and community.

After each session, the children receive a book they can bring home to their families to share stories with other children.

There was a time when a child asked his parents if he could plant some tomatoes outside their home after learning about farming and planting from a story he picked up from The Storytelling Project.

There is then a simple graduation ceremony, usually featuring a group performance by the children, upon the completion of the 21-day storytelling program.

The second phase is the library project, which involves the construction of new libraries in schools or communities or the renovation of existing ones.
“Reading is an academic activity, so a library is necessary,” he explains.

The third phase is the formation of a book club where children are taught how to write their own stories.

“The goal is to also teach children how to illustrate,” Bufi says.

The project has gone to several communities in Pangasinan, Mountain Province and Rizal.
In August, it will be heading for Coron in Palawan.

Bufi’s partners in the project are Mary Grace Soriano, Mannie Vazquez and lawyer Chris Linag.
Proponents know that they cannot do it alone so they seek the help of the entire community for the project.

For instance, they ask the parents to practice the storytelling routines at home while beneficiary schools are also enjoined to continue the activity in school.

Bufi and his group are seeking the help of corporate partners as well as individual sponsors to help them implement their activities. A corporate sponsorship of P50,000, for instance, goes a long way.

The proponents themselves do not require a lot. Bufi says they sleep in the schools or in the homes of families in the communities that open their doors to them.

“The book was all about saving and so we created piggy banks made of bamboo,” Bufi says.

He adds, “In this community, we stayed in their tribal house for almost 26 days. There is no electricity and mobile phone connection in the community and before you reach the area, you have to trek for at least four hours and it requires several river crossings.”

The Storytelling Project welcomes volunteers who want to join them as readers.

Indeed, Bufi is right in saying that if one has something good to share – be it a talent or an idea – there’s no better way to go than to share this with those who need it most.

Corporate and individual sponsors interested in supporting the project may get in touch with Bufi at 0918-9482590 or reysbufi@yahoo.com .

(Editor’s Note: The Philippine STAR’s #28StoriesOfGiving is a campaign that turns the spotlight on 28 inspiring stories of people and organizations who devote their lives to helping themselves or others. Everyone is encouraged to post or “tweet” a message of support with the hashtag, #28StoriesOfGiving. For every post, P5.00 will be added to The STAR’s existing ‘give back’ anniversary fund. For comments and suggestions to #28storiesofgiving, email contactus@philstar.com.ph follow @philippinestar on Twitter or visit The Philippine Star’s page on Facebook.)

Posted by Iris Cecilia Gonzales at 6:21 AM