Welcome to the Gates of Hell 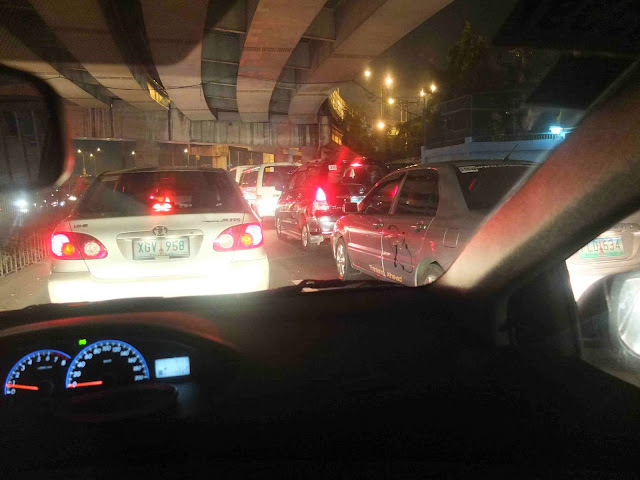 The seconds will turn into minutes. Ten. Twenty. Thirty. And the minutes will turn to hours. But nothing will happen. One hour. One and half. Nothing and nothing still. Two hours, then three and then you lose count. But not before you lose your mind.

In another place, one would have reached another country in that amount of time as I did from Paris to Italy on a bus filled with gypsy girls, construction workers and other third world travelers like me, one afternoon of April many years ago when the sun was slowly setting on the horizon, disappearing at the end of a vast stretch of lush green vineyards and rolling hills.

But this is not the French countryside with its blue skies and crisp air and there are no sprawling vineyards glowing under the yellow sun to distract me or anybody else cursed enough to be stuck in traffic.

This is the Philippines where the traffic situation has become a catastrophe, an invisible war, an apocalypse of sorts.

"Crisis level," is how the boyfriend describes it every time he opts to take the wheel not upon my prodding but because he does not like the way I drive.

There are no more rush hours because rush hours are all the time. There are no windows, no exceptions. Mondays, Tuesdays, Wednesdays, they're all the same. Thursdays, too. Friday is the worst day of all and when it is pay day, the mess is twice as much.

Imagine Metro Manila's nook and crannies because that's where it happens everyday and every time I pass by without fail. Imagine jeepneys stopping every five minutes to load and unload passengers; imagine the excess of commuter buses because of corruption in the regulatory agency; imagine still, flash floods and a clogged drainage system when there's a downpour; potholes, too and heaps of overflowing thrash.

Imagine throngs of commuters and pedestrians walking and jaywalking. Imagine license-bearing drivers who can barely drive. Imagine anything in Metro Manila's roads and it will be there.

When one is stuck in traffic in Manila's streets, there's no escape. Dan Brown wasn't kidding when he said that one has entered the gates of hell. And believe me when I say it is easier to leave one's wife than to get out of a snarl.

Lady drivers will have to hold out the call of nature as long as they can while the men will have to bring empty mineral bottles and put up their heavily tinted windows. Smokers will have to endure the stench of diesel; that or they forget about their nicotine fix.

Choices are limited and such limits fan the flames of madness. There is a very thin line between snapping and getting through so tame the road rage because it will be more lethal than a 7.2 magnitude earthquake.

Life hits a standstill for anyone stuck in traffic. Everyone suffers -- whether you're driving a sleek Rolls Royce or a moving piece of junk; whether it's with a red plate or a diplomatic one; whether the car is registered or not at all. There is nowhere to go and nothing to do but to crawl and wait and wait longer.  When driving alone, one can tune in to the radio. Even the strangest of voices could be a welcome company to anyone going insane.

Logging in to Twitter or Facebook through one's phones can provide some comfort but this is just fleeting and before you know it, the batteries are out.  Soon, like being jolted out of a reverie, one is back in the monstrous road, dealing with the snail pace traffic, along with hundreds of others who would rather be anywhere but there.

Yes it is a sin to argue with someone who has been stuck in traffic or to even ask how the ride was. Psychologists, I am sure, will soon see a link between traffic and temper among Filipino motorists.

It is hard for anyone living in countries where systems work to realize how insane Metro Manila traffic can be. Yet none of the authorities seems to give a damn; The traffic situation, although in critical proportions, is not on the list of problems to solve, at least not today or tomorrow and neither was it solved yesterday or the day before. It is the pink elephant in the room, a stark reminder that here in the Philippines, where lawmakers steal taxpayers' money; where bullets rain from nowhere; where children disappear in the dead of night and where a political student steals a photograph for a trip to Chile, the abnormal has become normal.
Posted by Iris Cecilia Gonzales at 8:31 AM