Everyone has his or her own drug. Mine is the first taste of air in a foreign country as soon as the airport's exit doors open. I started travelling to see the world when I was 13 and have fallen in love with the lure of travel ever since. No trip has ever disappointed me and every journey is still visible in my inner's mind eye. Travelling is the one thing I do for myself, enjoying everything new and unfamiliar.

My latest trip is in the Middle Eastern country of Qatar and my drug did not disappoint. The high was unbelievable, the surge cut deep in my senses. It is an enigmatic place with a high-desert yellow sun and crescent moons on golden mosques casting shadows on its paved streets.  The trip was yet another  stop in this lifelong unfinished journey between Tokyo, Japan and the tiny shack I live in, right at the top of Heartbreak Hill.

Doha for a Day

I woke up to a rising crimson sun, crawling from the far-away horizon somewhere at the end of a long stretch of a distant desert here in the Middle Eastern country of Qatar.

It is Monday, 5:30 am local time when I opened the airport’s exit doors to a waiting black car sent by the hotel. My eyes slowly adjusted to the sunlight and soon I saw majestic skyscrapers and centuries-old mosques casting shadows on the sandy pavement.

“Welcome to Doha,” said the Qatari driver named after King Solomon, the biblical King of Israel, said to be the wisest of all men.

Nestled halfway down the west coast of the Gulf, Qatar is a peninsula with a size of 11,521 square kilometers and a population of more than 1.5 million.

I am in Qatar for a three-day tightly scheduled coverage, which meant I only had Doha for a day.

But if a day was all I had, so be it. I ignored the lure of the soft bed and the call of the bathtub in my cozy tangerine colored room with dancing white draperies and a charming balcony facing the Arabian Peninsula. Instead, I took a quick shower and hopped on a waiting hotel service.

Raul, the Filipino driver, is said to be the hotel’s best city guide.

“He is a walking brochure,” said the man at the concierge.

Raul, in a sleek black coat and red tie, turned out exactly as I was promised. He took me around the paved streets of Doha, shimmering with shiny limousines and Porsche SUVs.

I saw a golden mosque, with its crescent moon glistening under the blinding rays of the sun. I saw majestic buildings standing alongside traditional Islamic homes, teeming with age-old architecture. I saw construction of buildings and malls everywhere, no doubt a reflection of economic boom in this gas-rich country.

When I stepped out of the car, I felt the scorching sun on my skin; the thermometer read 32 degrees Celsius. The air was dead dry. I felt like a watch in Dali's paintings, melting in the heat.

But this was no deterrent. The first stop was the local bank to exchange some cash. Here, I saw Filipinos standing in a long queue to send their hard earned Qatar Riyals to loved ones back home. There are roughly 150,000 Filipinos here in Qatar, government statistics show and indeed, they are everywhere. I saw them in classy restaurants, at the hotel’s concierge desk, behind the wheels of the hotel’s limo services, in buses and in malls.

We then went to the busy Souq Waqif, located in the center of Doha, near the busy palm-lined Corniche Road. The souq or market is a long, winding street of curio shops selling anything and everything, from the exotic to the ordinary. There are bags made of camel skin, Persian rags, antique wares, chimes and what-have- you.

There are stores selling figs, dates, Cashew nuts, coffee and honey. The smell of spices and shisha smoke wafted in the air.

Qatari women, covered in their floor length black Abaya filled the streets of the market, shopping and smiling while their husbands work in the offices and make money--the norm in this part of the world.

They stride in elegance, wear red lipstick, deep black mascara and heavy pearl earrings. And when they walk past you, the smell of their perfume will pervade long after they are gone. Imelda Marcos, known for her lingering signature Perry Ellis scent, comes to mind.

I bought a traditional red-checkered scarf, a brown vintage leather bag made out of camel skin and a golden chime adorned with stones of red, green and blue.

The next stop is the Museum of Islamic Art, a grand white building that rises majestically out of the emerald blue waters of Doha Bay.

Entering the five-story building, designed by Pritzker Prize laureate I M Pei, I found myself in a time warp as artworks, manuscripts, artifacts, ceramics, precious stones and textiles from the 7th to the 19th centuries filled the exhibition halls.

By the time I was on the last exhibit -- the Heritage of Art Diplomacy, which includes four 17th century paintings commissioned by the Habsburg ambassador von Kuefstein after his diplomatic mission in Istanbul -- I had spent more than two hours inside the museum.

I went back to the present-day as Raul took me next to the Katara Valley of Cultures, a quaint cultural village. I saw chic restaurants serving local cuisine, art shops and galleries. I wandered aimlessly in the narrow alleys of this maze-like district. Katara, to me, is Doha’s mini version of New York's Greenwich Village, flourishing with creativity and culture. There is a stunning and grand amphitheater in the league of the Rome Colosseum. The seats were empty when I visited but the voices of theater artists, performers and phantoms seem to reverberate in the eerie silence.

We drove by the State Mosque at high noon, during one of the Muslims’ five daily prayer hours. This sacred place can accommodate up to 10,000 worshippers inside and 30,000 outside.

Raul also brought me to the Villagio Mall in the Aspire Zone on Al Waab Street, past the Sports City.

Walking inside the Villagio, I am told, would give one a taste of Venice, Italy’s romantic “City of Canals,” with real gondolas plying the 150-meter indoor canal under a painted baby blue sky.

If one craves for luxury, the Villagio has a lot, selling at lower prices compared to the Philippines because of lower duties.

I saw women strolling with their newly bought bags of LV and Gucci.

"For the women here, Louis Vuitton is just like Mango in the Philippines. They buy a new one as often as they want," said Raul.

The last stop was the Pearl-Qatar, a breathtaking picturesque dock of private yachts owned by Doha’s rich and famous. This waterfront is home to international luxury names such as Ferragamo and Ferrari. Visitors can book boat trips here in between alfresco dining or sipping brewed coffee in world-class coffee shops that line the dock.

By late afternoon, I was back in my hotel, the five-star Ritz-Carlton, where I immediately headed to its famed spa on the ground floor for a deep-tissue massage to soothe my tired legs. Unfortunately, all the therapists were booked for the day but the Filipina staff gladly showed me the impressive first-class steam room and Jacuzzi, exactly as I had read on the pages of the plane’s in-flight magazine.

I ended the day with a sumptuous dinner at La Mer, the hotel’s signature restaurant on the 23rd floor, which provides a majestic view of the Persian Gulf and a gastronomic adventure of Modern French cuisine. It is a place to experience classical dining in its finest.

After roaming Doha for a day, I was off to the industrial city of Ras Laffan, two hours away from the capital for my coverage. On the two- hour trip, I saw the vastness of the desert and remembered travel writer Pico Iyer’s words he used to describe Ethiopia. “Just miles and miles and miles of nothingness.” Indeed, from the highway, I saw mostly a monotonous shade of brown.

Soon it was time to bid Qatar goodbye.

I left Doha in the middle of night; there was nothing but a round yellow moon and city lights. Yet, Doha's beauty shines in the darkness. She is a feast for the senses, teeming with remnants of bygone times and vignettes of modern life. She is no different from the Qatari woman, covered in her black Abaya with every strand of hair tucked under her veil; She is enigmatic and quiet, with a graceful sway and high-heeled black shoes, unable to conceal the beauty that she is and unwittingly captivating those who glance her way. 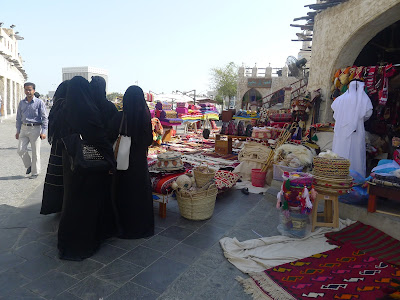 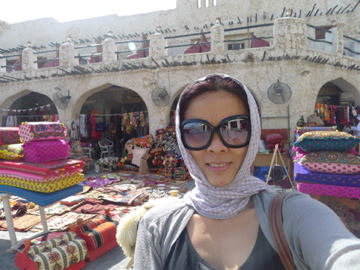 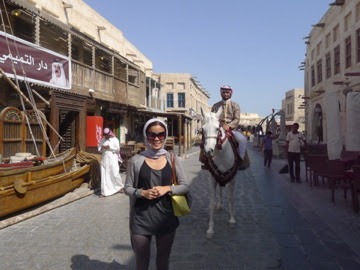 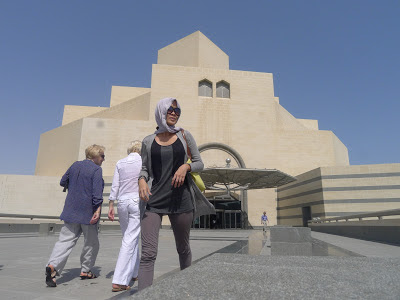 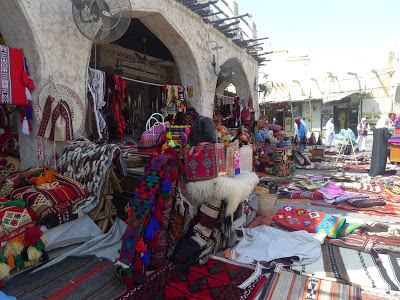 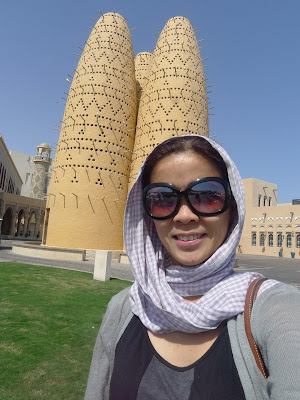 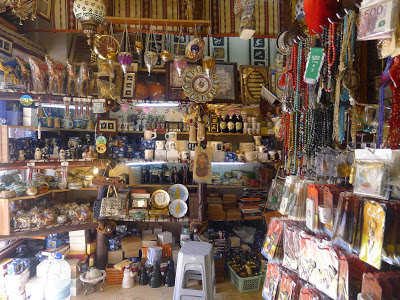 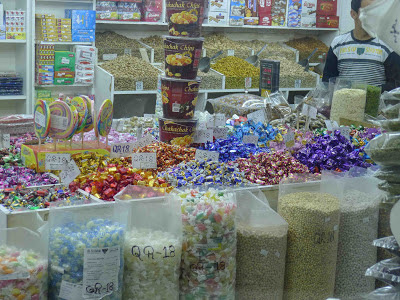 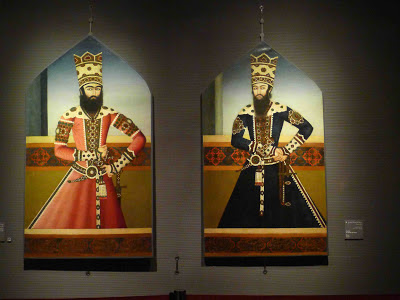 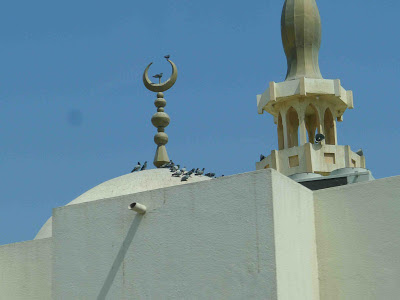 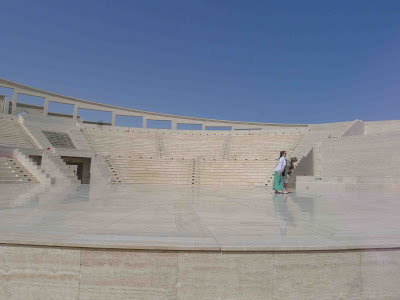 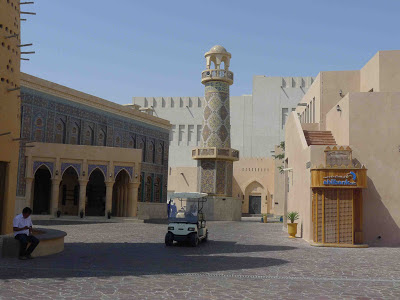