Culture of impunity thrives in the Philippines 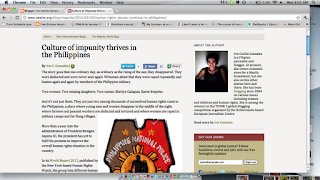 The story goes that one ordinary day, as ordinary as the rising of the sun, they disappeared. They were abducted and were never seen again. Witnesses attest that they were raped repeatedly and beaten again and again by members of the Philippine military.

And it’s not just them. They are just two among thousands of unresolved human rights cases in the Philippines, a place where young men and women disappear in the middle of the night, where farmers and peasant workers are abducted and tortured and where women are raped in military camps and far-flung villages.

More than a year into the administration of President Benigno Aquino III, the president has yet to fulfil his promise to improve the overall human rights situation in the country.

In its World Report 2012, published by the New York-based Human Rights Watch, the group lists different human rights issues that Aquino has yet to address: extra-judicial killings and enforced disappearances; private armies; torture; targeted killings of petty criminals and street youths; conflict with the New People’s Army and reproductive rights, among other issues.

‘President Benigno Aquino III maintains that the government is “working overtime” to prevent new cases of human rights violations and to resolve previous cases, and has pleaded for patience. Yet despite promises of reform, his administration has made little progress in addressing impunity. Extrajudicial killings of leftist activists and petty criminals continue, with the government failing to acknowledge and address involvement by the security forces and local officials,’ Human Rights Watch said in its report, released last month.

In the area of extra-judicial killings for instance, the human rights watchdog said the government has ‘largely failed to prosecute military personnel’ implicated in the killings of hundreds of leftist politicians and political activists, as well as journalists murdered since 2001.

‘Only 7 cases of extra-judicial killings from the past decade have been successfully prosecuted, none of which were in 2011 or involved active duty military personnel,’ the group said.

This was despite the military’s promise to improve the human rights situation in the country by going after those implicated in past cases.

And in stark contrast to the promises made by the administration, Human Rights Watch said politically motivated killings have continued.

‘Human Rights Watch has documented at least 7 extrajudicial killings and 3 enforced disappearances for which there is strong evidence of military involvement since Aquino took office in June 2010,’ the group said.

Citing some cases of disappearances – such as that of 4 leftist activists in 2006 and 2007 (Sherlyn Cadapan, Karen Empeño, Manuel Merino, and Jonas Burgos) – Human Rights Watch said that the families continue to face ‘inaction from the government’.

President Aquino has also failed to fulfil his promise to dismantle the ‘private armies’ of politicians and wealthy landowners.

These groups have long been responsible for serious abuses, including the politically motivated Maguindanao Massacre which killed 58 people including media workers.

‘Promises to revoke Executive Order 546, which local officials cite to justify the provision of arms to their personal forces, also have not come to fruition. Aquino still defends the use of poorly trained and abusive paramilitary forces to fight NPA insurgents and Islamist armed groups,’ the group reported.

The list of human rights issues that have yet to be settled and addressed goes on and on.

Victims of human rights violations can only hope that the current administration will finally fulfil its promises.

‘The Philippines is a multiparty democracy with an elected president and legislature, a thriving civil society sector, and a vibrant media. Several key institutions, including the judiciary and law enforcement agencies, remain weak and the military and police still commit human rights violations with impunity,’ Human Rights Watch concluded.

Indeed, a culture of impunity remains despite promises of reform. Whether or not the administration is serious with its commitment to address human rights issues has yet to be seen.

Meantime, mothers of missing students, loved ones of victims and the victims themselves will continue their quest for justice.
Posted by Iris Cecilia Gonzales at 3:57 PM