Our Book is Finally Out!

After roughly twenty flights around the country, countless verbal confrontation with Customs guards,  dozens of sleep-deprived nights, gulping on bottles of single malt scotch and beer and cups of coffee, and near misses of WWIII, our project is finally complete.

There are hundreds of people to thank for making this endeavor possible but most of all, I thank my co-author Jes Aznar for giving me the courage to do this and the strength that brought out the words. 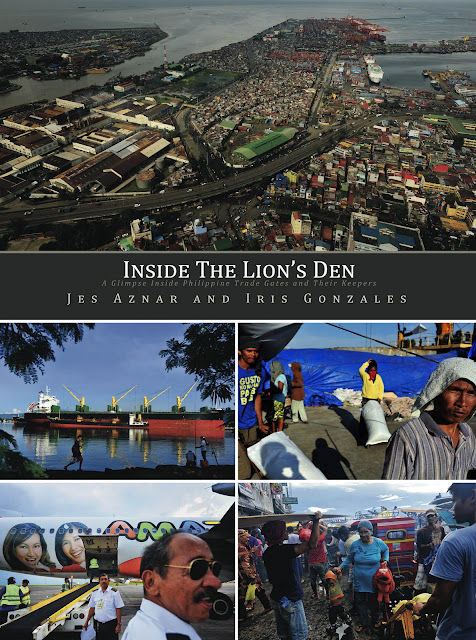 
Our book,  about Philippine trade gates and their keepers and the problem of corruption and rampant smuggling, is finally out! It will be available in major bookstores starting next week.
Inside the Lion’s Den is a photographic reportage by Jes Aznar, accompanied by essays written by Iris Gonzales, on fragments of daily life inside the country’s trade gates, port areas and the men and women who work here.
It is a documentary journey of a photographer and a writer inside a bureaucracy often unknown to and deplored by the outside world – the Bureau of Customs, its collection districts around the country, far-flung sub-ports and the men and women who comprise it.
It is a story of many stories of survival, self-preservation, and dreams coming true.
The collection of images captured the different aspects of life in both the Bureau of Customs and in the many ports around the country.
The essays provide information on the history of the bureau and the collection districts that are defined by their geographical positions and the economies in their respective areas. The articles also tackle the problem of rampant smuggling and the culture of corruption inside.
It is a journalistic endeavor driven by a desire to chronicle something important in a society struggling to exist meaningfully and define itself, and the need to share it.
The book is edited by Sonny Yabao with text editing by Michael Marasigan. It is published by Europa.

"With unprecedented access granted by its very own Commissioner and if only from a pure photo-documentary standpoint, the images break positive new ground in the direction of public interest and what can hopefully be more honestly transparent and real views of a public agency’s actual role in the country’s life and function. – Ben Razon, from the Foreword to the Photographs.

Posted by Iris Cecilia Gonzales at 10:17 AM