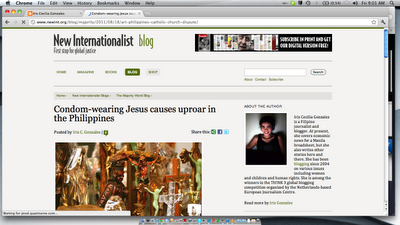 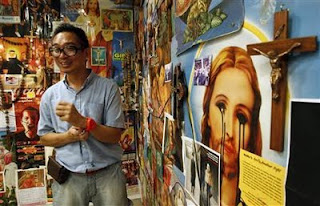 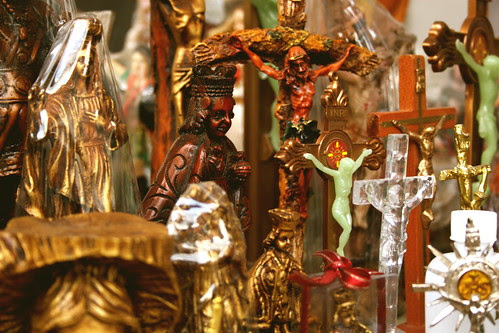 Religious icons for sale in the Philippines. Photo by The Wandering Angel under a CC Licence.
Jesus Christ, nailed on the cross, has a penis covered by a bright red condom.
On the same wall beside where the giant crucifix hangs there are different posters of Mother Mary and Jesus Christ mixed with images of Mickey Mouse, US President Barack Obama and the Statue of Liberty.
This is ‘Poleteismo’ (Polytheism), an art installation by 37-year-old visual and performance artist Mideo Cruz.
The installation is now the centre of intense uproar from conservative Catholics, some of whom threatened to kill Cruz.
Cruz, a laidback guy living a bohemian life, now fears for his life, saying that fanatics may put a bullet on his head, just as John Lennon’s killer did to the Beatles star.
The exhibit opened at the Cultural Center of the Philippines (CCP), a government-owned institution for culture and the arts which was the project of former First Lady Imelda Marcos in the 1970s. Imelda, known for her lavish lifestyle, is the wife of the late dictator Ferdinand Marcos.
Now a Congressional representative in her home province in the northern Philippines, Imelda asked the CCP to shut down the exhibit, saying that art should only be beautiful.
A viewer, perhaps a conservative Catholic, has vandalized the artwork.
Eventually, CCP closed the exhibit, giving in to pressure and threats, a move widely criticized by local artists.
Yet religious groups, dressed in creaseless white robes, continue to condemn what for them is a blasphemous piece of art, forgetting that freedom of expression is fundamental and that it is this same freedom that allows them to practise their religion in public.
Indeed, the Catholic Church in the Philippines is missing the point.
Cruz’ artwork is merely a reflection of what this predominantly Catholic country has become; of how the practice of Christianity in the country has been reduced to worshipping religious icons, or a sort of polytheism.
‘This [installation] speaks about objects that we worship, how we create these gods and idols and how we in turn are created by our gods and idols,” Cruz said in an interview with Reuters.
In the same interview, Cruz explains that the giant crucifix with a penis that can be moved up and down symbolizes the patriarchal nature of Philippine society, where men continue to be worshipped, something that the country’s Spanish colonizers bequeathed.
As I write, there is an ongoing Senate investigation on the matter and Catholic conservatives are ganging up on Cruz.
Little do they realize, however, that Cruz’ work reflects the Philippines’ self-contradictions and ambiguities, excesses and deficiencies.
The truth hurts, of course.
(Photo credits above: Reuters)
Posted by Iris Cecilia Gonzales at 5:39 PM