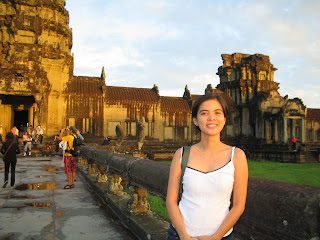 SIEM REAP, Cambodia - I woke up at 4:30 a.m. today to witness the sunrise from the monuments of Angkor.

Angkor Wat is one of my favorite temples here. It is a majestic complex filled with darkened doorways, Buddhist shrines illuminated only by the flicker of a candle, the smell of incense and carvings of gods and demons.

Angkor Wat is said to be the largest and best-preserved temple at the site. It was built for King Suryavarman II in the early 12th century as his state temple and capital city.

"It is designed to represent Mount Meru, home of the gods in Hindu mythology: within a moat and an outer wall 3.6 km (2.2 miles) long are three rectangular galleries, each raised above the next. At the centre of the temple stands a quincunx of towers."

I stayed in Angkor Wat for almost two hours, admiring its grandeur and magnificence. Inside, in the labyrinthine walkways and stone-carved walls, I almost heard the gods and the demons call each other. It is an experience more profound than I had expected. 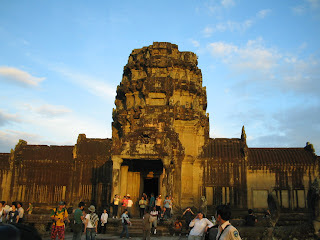 Posted by Iris Cecilia Gonzales at 2:37 AM