FILIPINO IDPs: Struggling to rebuild their lives - TH!NK ABOUT IT 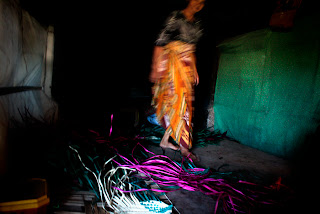 FILIPINO IDPs: Struggling to rebuild their lives - TH!NK ABOUT IT


(text and photos by the author)

DATU PIANG, Philippines – Jun comes out from the darkness with a charcoaled kettle on one hand. He squints, eyes blinded by the glare of the yellow sun. His four-year-old-daughter peeps outside to look for her daddy. Strands of curly brown hair cover her big round eyes. Jun makes a few steps to an open fire to boil some drinking water.

This space is temporary shelter to dozens of internally displaced persons (IDPs) here in the province of Maguindanao in the Southern Philippine island of Mindanao. Caught in the middle of decades-long conflict between government troops and rebels, the IDPs had to leave their homes in far-flung villages.

When they moved to the school compound, they slept inside makeshift tents set up on the vacant front-yard but authorities transferred them to the huge area underneath the school in preparation for the national elections held last May 10. In the Philippines, the voting and counting of ballots are done in public and private schools around the country.

Photos by the author

This underworld is a shadowed space. Small amounts of light seep through the slabs of wooden panels that serve as walls. Some makeshift doors are too small. To get inside, you have to bend through these manholes, like in the movie Alice in Wonderland.

There are no tables and beds, everything improvised from broken classroom chairs and tables. They sleep on tattered mats laid on the dry earth, sharing the space with scrap and junked materials the school no longer needs.

The stench of mud, trash and spoiled food pervades in the air. There is no toilet, just patches of dug holes on the ground. No clean water, no electricity.

Jun, his wife Angel and their three children are among the IDPs who fled from the interior villages.

According to the United Nations World Food Programme, in a March 14, 2010 article published by Mindanews, a Mindanao-based online news cooperative and information center, there are 320,000 people who remain displaced in Maguindanao and neighboring areas as of September last year.

Two years have passed but the thunderous sounds of guns and flying howitzers still echo in their ears. The pain of leaving their homes still haunts them. They remember it like a loved one's death anniversary.

Each passing day, they struggle to rebuild their lives.

She helps distribute medicines during mission work. She earns P300 for a day of work.

“That’s a big help for my family,” she says.

On most days, Jun waits for Angel to come home while looking after the children. A regular job is hard to come by for him because he did not finish elementary school.

But on lucky days, he says, non-government organizations offer them “food for work.” He points to a distant concrete house he helped build some months ago in return for some cash for his family’s survival.

There are other IDPs here, the spaces divided for each family by whatever clothing and wooden panels they can find.

Photo by the author.

In another area are Aida and her children. Today, she is busy weaving fans out of the native silay or palm leaves. The whole space she occupies is covered by heaps of colored leaves, some untouched, some unfinished.

She is preparing to complete a dozen of these fans to sell to the market for P110. It’s a long process. The leaves are laid out on the sun for days. These are then dabbed with different colors to create designs straight of her dreams.

The dyed fans are then left under the heat for another long process of drying.

From the sun-dried leaves, there emerges--like magic--a kaleidoscope of yellow, purple and green colored fans.

This helps Aida and her kids survive on most days.

When there is nothing to sell, she puts her children to sleep with their stomachs grumbling and empty.

But for the IDPs here, giving up isn’t an option.

Slowly, one by one, piece by piece, difficult as it may be, they struggle to rebuild their lives harshly disrupted by war, as tedious and as careful as the way they weave those little intricately-colored fans for a few pesos a day.
Posted by Iris Cecilia Gonzales at 4:06 AM