I had the honor of being chosen as a sponsor or ninang to a colleague's son last Sunday. It was my first time to really attend a baptism ceremony because in the past, I only learned later on that I was one of the sponsors.

It was a mass baptism and there were babies everywhere. It's very humanizing, amazing, genuinely wonderful but scary. Ninongs and ninangs were everywhere. Looking back now, I wonder where my ninongs and ninangs are. I haven't seen them except for one who has been there for me in good and bad times.

It's a big world out there. The babies I saw last Sunday would soon be making their individual journeys in this big and crazy universe. I hope they make it with their parents and godparents by their side. I hope I'd be the ninang that my godson would need.

Cheers to the all the babies of this world and those who are yet to come!
Posted by Iris Cecilia Gonzales at 6:18 PM 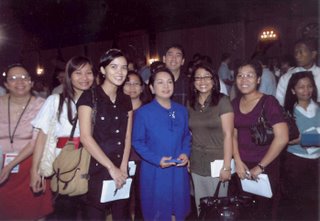 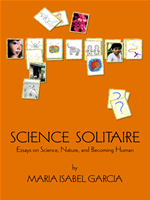 Remember those boring science classes? Those dreaded exams on biology, physics and chemistry? I was one of those who never really enjoyed listening to science lectures. Although I've always had an insatiable thirst to find out how the world works, I never considered science classes as the way to quench that thirst.

But for several nights now, I've been swept away into the magical world of science. The teacher is no less than science writer Maria Isabel Garcia and it took her less than 300 pages to make me truly interested in how science works and just how amazing it affects the journey towards being truly human.

Science Solitaire (Ateneo Press' Book of the Month for January) is a very interesting collection of essays on how the mind works, on the science of love, on religion, on what happens to our bodies when we are truly happy, on the awesome powers of the universe and on everything else that affects our journey here and beyond.

It's a mind dance that gives a fresh insight on science, allowing us to unlearn and rediscover the truths and the mistruths about the universe.

And it's funny, too.

In Eternity for Dummies, for instance, I had a good laugh after reading the piece last night.

Garcia writes: "You may get rid of your wrinkles, your love handles, stretch marks, or age spots but your cells do not care. They will age anyway at the same rate, regardless of how one looks. And unless one is a fruit fly, yeast, a worm, a mouse or a rhesus monkey--gene-twitching experiments on which seem to hold promise as far as slowing the age process is concerned--nothing, I repeat, nothing has yet been found to work on humans."

I read this piece rolling in laughter. It might have been addressed to people like me. That night, just before I picked up the book, I had already filled my face with anti-aging cream.
Posted by Iris Cecilia Gonzales at 6:06 AM

There is an interesting dilemma that the so-called new journalism has brought upon print journalists.

I realized the past year that online journalism has rapidly changed the way reporters work in the beat. At least that's what I'm seeing in my own circle, the economics beat, particularly the energy sector.

Just last week, I have seen colleagues shocked by how fast their stories appear on the Internet. One male reporter who submits stories to a television news program was so shocked to see his article on the official website of that broadcast station.

Here's the thing. If they submit the stories to these Internet sites, they get extra cash but they run the risk of being outscooped by their very own articles. One male reporter complained that his editor used a story posted on the Internet (submitted by his colleague from the same beat) simply because that story was available way before the 5 p.m. deadline for print reporters.

At the very least, their very own newspaper editors can easily call their attention because of a story on the Internet.

A reporter may be at a press conference and depending on the website he's looking at, he may find the big story from that press event staring right at him as soon as he sits in front of the computer to work on his story.

For now, it's a balancing act for print journalists who dabble as stringers of other news agencies.

Nobody knows for sure what the future has in store for journalism. Print media may sooner or later be a thing of the past but I sure hope not.

One thing remains clear to me. At the end of the day, journalism will always be about stories. Real stories. Real people. Real events. It's about stories that make the world an interesting place to live in. And it's the reason that journalists--print, broadcast or online--stay in this crazy yet addicting vocation.
Posted by Iris Cecilia Gonzales at 7:10 AM