I am savoring my last sip of ice cold Tanduay Ice when Mang Rudy arrives. He is wearing his usual striped t-shirt, ragged jeans and his good 'ol classic guitar. Tightly holding his wife's arms, Mang Rudy navigates his way through the tables.

It is almost 12 midnight but Mang Rudy and wife Amy are just about to start their day.

Mang Rudy makes a living by making people laugh or cry. In dark corners of bars filled with old rags, corrupt politicians, media practitioners, lonely husbands and depressed mistresses, Mang Rudy belts out songs that pierce straight to the soul. He does this for a few pesos. On good nights, he gets up to P500 or more.

He hasn't changed at all. He still looks the same, exudes the same energy and has the same amount of love for his work.

He joins our table and asks who is around. Mang Rudy has been blind since birth. The Oakley shades conceal the pain of not seeing the world around him.

He sings "Ain't No Sunshine When She's Gone."

I utter a greeting. I haven't seen Mang Rudy in years. What happens next surprises me.

Mang Rudy stops his singing and glances my way. "Iris!!!" He seemed so genuinely happy to hear my voice. He recognizes it without anyone telling him.

I am jolted out of my Tanduay-induced stuppor. I was shock to find out that Mang Rudy noticed how long I was "gone."

Yes Mang Rudy noticed that I've been gone from this particular world where real friends talk until the wee hours of the morning -- no hang-ups, no pretensions, no walking on egg shells but just real stuff on life and the kind of journalism that stands witness to it.

Mang Rudy sings a song for me. My soul falls into a good slumber.
Posted by Iris Cecilia Gonzales at 7:34 PM 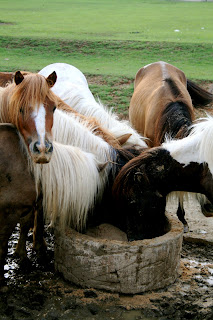 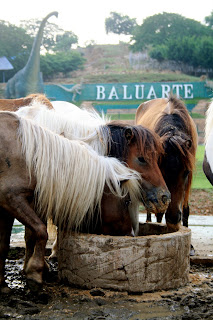 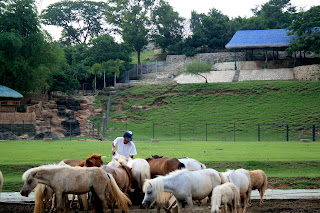 globetrotting in the time of influenza

I would normally jump on any invite for a trip abroad, whether it's business or pleasure. That's me, bitten by the travel bug since I was a child. However, when I was given this assignment, I hesitated.

But assignments are assignments. There's no reason to say no unless you have absolutely no choice.

So, I'm hoping I didn't catch THE flu. These days, however, maybe that's almost like asking for the moon. At the Centennial airport, it's a crowded Sunday morning. There's no escaping the virus if it's there. Everywhere you go, there's a crowd, a line or a gathering of people.

Some are wearing masks, some seemingly isolating themselves from the crowd while others couldn't care less.

As for me, I didn't have the time to worry. I was late for my flight and could hear my name already being called on the P.A. system by the airlines. My plane is about to leave.

On the plane, I wanted to sit alone. I wanted to stay safe for the sake of my two-year old daughter back home. Unfortunately, the airbus was crowded.

At the hotel where I and another journalist was billeted, there were some precautionary measures. There were lots of signs on what to do and what not to do to prevent the flu from spreading.

A friend in the area wanted to meet up with me. She told me to meet her at this coffee shop. On the way there, she said, I should avoid the crowded streets. Whew!

Oh, and that I should avoid touching my ears, eyes and nose.

At the airport, on my way back to Manila, I saw the girlfriend of a former housemate. She was wearing a mask. A big one. It was good to see her but we had to avoid the usual beso-beso.

On the plane, the French guy seated beside me was trying to strike a conversation. Photography, diving, Paris and Bordeux...he wanted to talk about these things. Oh but he kept on sneezing!

A few hours later, I'm back in Manila. I went to a dear friend's office to wash and change clothes -- my futile attempt to keep clean.

It's been less than ten days. I don't have the symptoms so far. But who knows what tomorrow will bring.
Posted by Iris Cecilia Gonzales at 4:53 AM

I was barely awake when my phone rang. The voice on the other line was trembling. "Maam, may picture po ba kayo ni Borek? Nawawala po kasi siya..." It was M, the mother I interviewed recently for a book project.

Her son Borek, diagnosed with Down syndrome, went missing. He left the house, went biking around the area and soon, he was nowhere to be found.

She was crying and crying. I didn't know what to say. "Yes, I have photos. I will ask the photographer, too. I will send them now," I answered. Was that the only thing I could do? Sigh.

I called Jes Aznar to break the sad news and to ask for the photos He was in Mindanao for a coverage. He was so shocked to hear the news.

We were just playing with Borek a few weekends ago. I barely finished my stories for that day. I was shocked, bothered and frustrated.

I thought of M's ordeal. You really can't protect your child from the world 24/7. Sometimes, bad things just happen.

Six hours later, I get a text message from M.

And her story continues...
Posted by Iris Cecilia Gonzales at 4:20 AM