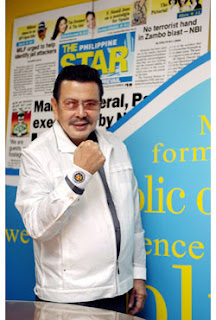 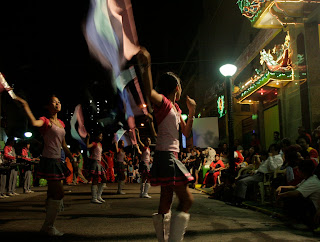 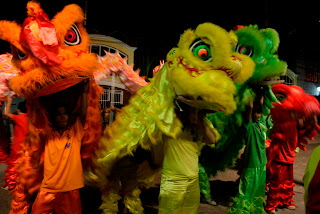 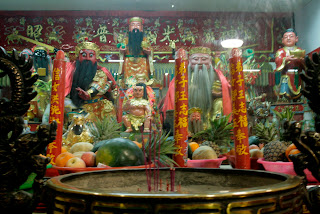 It is a few hours before the clock strikes 12. The gongs are banging, roaring like wild lions.

The lights -- red, blue, orange and hazy yellow -- are blazing nonstop. The piercing smell of incense wafts in the air.

Dragons are dancing and endless chants are reverberating throughout the night, igniting these winged spirits.

This is a feast for the senses. Every trickle of blood that runs in my veins is thumping faster. My eyes -- like those of a little girl delighted by the sight of bright red balloons and purple lollipops -- are seeing a kaleidoscope of colors.

The Chinese Gods are calling my name, wishing me a good year ahead. I hear them for the first time. I hear them vividly.

Majorettes in olive green miniskirts are dancing to the blaring sound of drums and other percussion instruments. Pink and blue flags are waving, almost up and about the evening sky.

Firecrackers are lit to ward off two-faced snake charmers in black turbans. The thunderous cracking drowns the nightmares that haunted me the past year.

My dreams are now within arms' length. I see these in images out of the smoke emanating from the incense-filled temple.

Ah, I can hold eternity in my palm. Right here. Right now.


(Needless to say, thank you for bringing me here on my birthday).
Posted by Iris Cecilia Gonzales at 1:24 AM

MANILA, Philippines - The government’s budget deficit swelled to P298.5 billion last year, above the expected P290 billion and also higher than the target for the period of P250 billion because of anemic revenues and additional spending, Finance Secretary Margarito Teves announced yesterday.

Last year’s budget gap is more than four times the P68.1-billion deficit registered in 2008 or an increase of 338.3 percent.

A budget deficit means the government does not have enough revenues to fund its expenses, particularly social services and infrastructure spending.

Teves said the implementation of so-called revenue-eroding measures which translated to P49 billion in foregone revenues in 2009 alone left a huge dent on state coffers.

“We were actually hoping to perform better than the likely scenario due to the improved tax collection performance in December. But the revenue gains were offset by increased spending for infrastructure towards the end of the year,” Teves said.

Total 2009 revenues amounted to P1.1 trillion, lower than program by P115.9 billion. Of the total revenues, the Bureau of Internal Revenue (BIR) collected P750.3 billion or P48.2 billion lower than its collection goal.

The Bureau of Customs (BOC), meanwhile, collected P220.3 billion, lower than program by P53 billion due largely to a sharper than expected drop in imports.

Total expenditures, on the other hand, amounted to P1.42 trillion which is lower than program by P67.4 billion.

In December 2009 alone, the budget deficit amounted to P26 billion, significantly higher than the deficit of P1.4 billion posted during the same month of the previous year.

Total revenues for the month amounted to P101.5 billion, lower by 16.3 percent compared to revenues recorded in December 2008. The BIR accounted for P68.4 billion of the month’s revenues or 20 percent higher than the agency’s collections in the same period in 2008.

The BOC, on the other hand, collected P18.9 billion, a slight 0.4 percent increase compared to the previous year.

The BTr, meanwhile, generated P9.4 billion in December 2009, almost 50 percent higher compared to the previous year while other offices generated P4.9 billion or a decline of 87.5 percent.

“We hope to sustain our revenue performance through the vigorous implementation of the action plans of the BIR and the BOC and the attainment of our privatization program but we need the cooperation of Congress to protect our fiscal gains from further erosion,” Teves said.
Posted by Iris Cecilia Gonzales at 10:02 AM