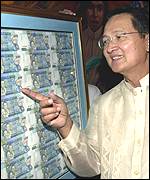 He was valiant to the end, much like a runner triumphantly rounding the homestretch after a fruitful life that included a successful stint as the country's top banking regulator.

Former Bangko Sentral ng Pilipinas (BSP) Rafael Carlos B. Buenaventura passed away at 3:10 p.m. yesterday at the Asian Hospital in Muntinlupa City after a falling into a coma, said his wife, artist Ma. Victoria Rufino who was with him.

"He passed away peacefully at 3:10 p.m. because of cardiac arrest due to complications," she said yesterday.

His remains were to be cremated last night. A novena mass will be held today (Dec. 1) at 6 p.m at the Santuario de San Antonio church in Forbes Park, Makati.

During his stint, he managed to keep monetary policy and the banking sector stable despite facing one of the toughest political transitions in the country's history.

Gov."Paeng" as he is fondly called by family and friends, emerged as one of the most colorful personalities in banking.

He implemented much-needed reforms in the sector and saw the Philippine central bank through one of the toughest times in the country including the impeachment trial of former president Joseph E. Estrada.

Mr. Buenaventura considered his biggest achievement as laying down the foundation for microfinance banking.

"I like to think that microfinance is my most important contribution," he said in an interview back in 2004.

He has become so passionate with Bangko Sentral's microfinance initiatives that reporters covering the beat during his time have become so used to the topic.

In fact, reporters would jokingly close their notebooks when the amiable governor starts talking about his latest microfinance initiatives.

But people aspiring to put up small businesses can only thank him for his legacy. Since Mr. Buenaventura introduced microfinance initiatives, the number of banks engaged in small-scale, collateral-free lending has risen to 132 from only 20 in 1999.

Mr. Buenaventura encouraged banks to engage in microfinance lending by having the central bank provide incentives for those venturing into the business.

The former Citibanker also counts as an achievement the central bank's shift to the so-called inflation-targetting method of setting monetary policy.

Local and international business circles recognized his successful term but it was the recognition fromthe prestigious New York-based Global Finance magazine that he is most proud of.

He was given a Grade A from 2002 and 2003, a feat that was difficult to achieve for a monetary chief in an emerging market like the Philippines.

Before being appointed as central bank chief, Mr. Buenaventura spent more than three decades in the private sector as head of PCIBank and regional treasurer of Citibank. He also headed the Bankers Association of the Philippines, the lobby group of local bankers.

He ended his stint at the BSP happy that President Gloria Macapagal-Arroyo appointed Amando M. Tetangco as his successor.

On the lighter side, Mr. Buenaventura is known for his sense of humor, his crisp barongs, well-combed hair and colorful ties.

Mr. Buenaventura is a proud Atenean, where he completed his secondary education.

After completing his high school education at the Ateneo, Mr. Buenaventura studied at the De La Salle University, where he received a bachelor's degree in commerce.

He completed a master’s degree in business administration at the Stern School of Business of the New York University in the United States.

(A shorter version of this article was published in BusinessWorld on Dec. 1; photo from news.bbc.co.uk).

I covered Gov. Paeng for two years when I was assigned to cover the central bank beat in 2004. I didn't like him at first because I felt like he only wanted to talk to the veterans but I would later earn his trust.

I learned a lot from this man, a sweet, charming, brilliant and well-respected government official. Although there were times when I felt like he was still wearing a bankers' hat while at the central bank, the policies that he pushed proved otherwise.

"Chances favor a prepared man," he likes to tell reporters. I never forgot that piece of advice since then.

The last time I talked to him was in September when I apologized for missing his dinner invitation. He was charming and amiable as always. He said we'd see each other again. That was, however, the last time I would talk to him.

Posted by Iris Cecilia Gonzales at 4:52 AM