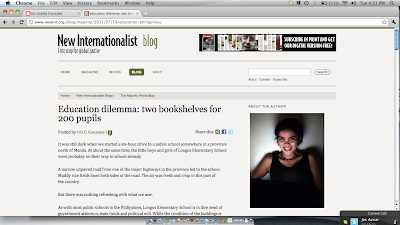 It was still dark when we started a six-hour drive to a public school somewhere in a province north of Manila. At about the same time, the little boys and girls of Longos Elementary School were probably on their way to school already.
A narrow unpaved road from one of the major highways in the province led to the school. Muddy rice fields lined both sides of the road. The air was fresh and crisp in this part of the country.
But there was nothing refreshing with what we saw.
As with most public schools in the Philippines, Longos Elementary School is in dire need of government attention, state funds and political will. While the condition of the buildings is relatively better than in other public schools in far-flung areas around the country, there is still a lot of improvement needed.
There were only two bookshelves in the library, with only a handful of books shared by almost 200 students. A tropical storm battered the province in 2009, leaving most of the books in the makeshift library drenched and damaged.
And there we were, four journalists representing the country’s organization of economic reporters and editors. Our daily grind of covering the economy consisted of interpreting financial statements, reading between the government’s fiscal data, understanding the budget, monitoring monetary policies and reporting the latest inflation figures, among other stuff.
But what we saw in front of us needed no interpretation or mathematical computation.
The situation was stark and telling. It was a vivid portrait of the economy. The school building needed renovation. Some classrooms were dilapidated. And only two toilets were to be used in a school of 190 students.
School officials lamented the situation but were helpless about it. Politicians only visited them during campaign season but never returned to fulfill a single pledge when the elections were over, they said.
We brought three small boxes of second-hand books and a few bags containing school supplies. It was part of the organization’s regular outreach activities. Even if we wanted to bring more stuff, we had very limited resources. The supplies were probably all used up by the following week or so.
And even if there were a thousand more organizations such as ours, we still wouldn’t be able to fill the gap in the country’s public educational system.
What is needed is the government’s strongest political will to prioritize education. This means that every centavo earned from the taxes of the people would go to the necessary social services such as education and public health, and not pocketed by some corrupt politician, lawmaker or government official.
Until this happens, the country’s public education system remains as tattered and worn out as the blue and red Philippine flag that waived with the wind that Friday afternoon when we bid goodbye to the students of Longos Elementary School.
Photos by Jes Aznar
Posted by Iris Cecilia Gonzales at 1:57 AM