Living (and lying) for the American Dream

One of my recent blogs on The New Internationalist: 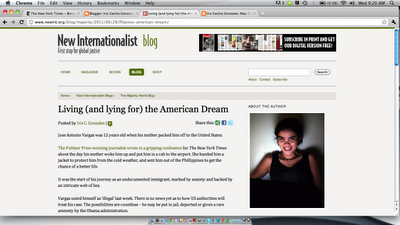 Jose Antonio Vargas was 12 years old when his mother packed him off to the United States.

The Pulitzer Prize-winning journalist wrote in a gripping confession for The New York Timesabout the day his mother woke him up and put him in a cab to the airport. She handed him a jacket to protect him from the cold weather, and sent him out of the Phillippines to get the chance of a better life.
It was the start of his journey as an undocumented immigrant, marked by anxiety and backed by an intricate web of lies.
Vargas outed himself as ‘illegal’ last week. There is no news yet as to how US authorities will treat his case. The possibilities are countless – he may be put in jail, deported or given a rare amnesty by the Obama administration.
Reading his story reminded me how bad the situation has become.
Back here at home, at the Philippines’ main airport, throngs of Filipinos continue to send off their loved ones to different corners of the world every day. Some use fake passports while others bribe immigration officials to get past the control gates. Most still do it legally, but the number of people who resort to illegal means to work overseas still runs into the millions.
Some stories are worse than Vargas’. But their lives are as difficult and painful. I remember one incident back in my high school years, many moons ago. A classmate’s sister had died in a car accident.
Her morbid death was made more tragic by the fact that her mother could not make it to the funeral because she was toiling on American shores as an illegal immigrant. There was no way she could come home because she did not have the right papers. So she couldn’t pay her last respects to her eldest child, or send her daughter to her final resting place.
Another story is that of a close friend who went to the United States in search of a better life for himself and his daughter. A famous actor over here, he opted instead to live an illegal immigrant’s life, going from one job to another. He worked as a carer, a truck driver and a domestic help.
At night, he would drink gin to drown out the pain of his reduced circumstances.
This is the reality of Filipinos seeking better opportunities to feed their families. At home, they’re called heroes by the same government whose inefficiency has forced them to leave their loved ones in the first place.
They are heroes indeed for a government whose actions are far from heroic.
Posted by Iris Cecilia Gonzales at 6:23 PM