DATELINE MINDANAO: Still lives at the ends of the earth 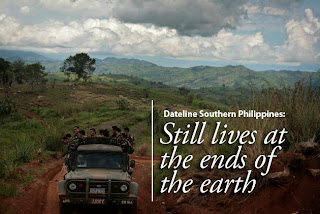 If you want a ride, you have to stand beside a tree behind a thatched house. It is only from this spot where one can obtain – only if one is lucky enough – a mobile phone signal. You send a message to the men who drive the motorcycles roaming nearby villages and they will come and get you for at least P200 pesos, depending on where you’re going.

There is no signal from this “sacred” tree today. I walk toward the only school in the community. It is 500 meters away. On good days, there’s a signal there, too.

I need to request for a motorcycle to come pick me up. It is five in the afternoon. Darkness will soon set in. I need to leave because I have to file my story. I’m not sure when I can go back here.

Sitio Kuhan is a remote village in the municipality of South Upi in Maguindanao. I am here to cover for THINK3 how people in far-flung communities in Mindanao are preparing for the elections.

The rented two-wheels arrive. We start the most arduous ride I have ever taken my whole life. The narrow, rugged terrain is riddled with boulders and covered with potholes. The thickest mud makes it slippery and in just one wrong move, we will crash.

At 120-kilometers per hour, we zoom past through blankets of fog. Zero visibility. I can barely see anything, not even the wild grass that constantly slap my face as we move deeper into the trail.

It is a 45-minute ride and for the people of Kuhan, coming and in out of the village on this motorcycle ride may be the only single movement in their lives.

Kuhan is a farming village teeming with poverty. The lives of the people here are at a standstill. 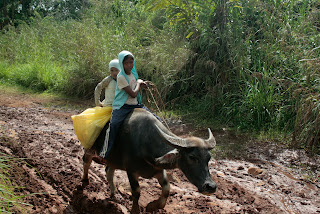 The men spend the whole year toiling kernels of corn in distant farms that are not their own. They earn only once a year, which is during harvest season when they sell their produce to the markets in Cotabato, a province five hours away. This happens only if rodents have not feasted on their crops.

The rest of the year, they eat whatever vegetables they can harvest. The women while their time waiting for their men to come home after spending the whole day at the farm.

The children of Kuhan, who look half their age with the lack of proper nutrition, spend the time playing on the dry earth. They play on wheelbarrows used by their fathers to transport crops. They play on broken benches, sticks and stones, mud and stagnant water.

Their laughter reverberates in the air. 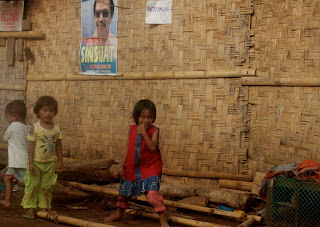 “People here have no incomes. Try living here and you’ll be lucky if you can even buy yourself an underwear,” says 22-year old Naida who plans to find a better future in Manila.

The dominant color of this village is a huge patch of faded brown, as brown as the earth and as faded as the blank expressions on the people’s faces. The only hues of red, yellow and blue come from the posters plastered by politicians running for the national elections.

In a country with a national budget that runs in at least a trillion a year, I’m not surprised why this village of 300 voters does not get even the smallest slice of the pie.

I’m not surprised because Kuhan is in Mindanao and in this southern Philippine island, the reality is that wealth is shared only by a few politicians who spend people’s money building pseudo municipalities in their names.

What one can see in the rest of the country, one will see in Mindanao unfolding cold, live and ruthless before one’s eyes. Poverty is at its worst. Kuhan is just one village. There are thousands more in remote and distant places. The lives of the people are at a standstill. 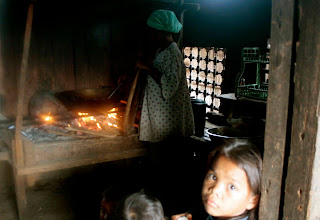 photos by the author