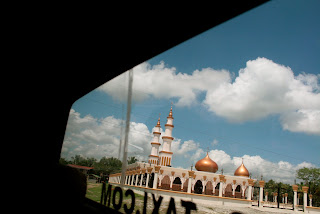 The muse gets off the plane. Mindanao is perspiring in the heat. But the muse loves it. It is the warmest embrace. She is back in the southern Philippine island which she saw for the first time many years ago. She feels at home in this strange land, as if back in the arms of a long-lost lover.

This time, the trip isn’t with a bunch of soldiers off to war. It's not to write about the re-opening of a highway conquered by rebels or to see bodies strewn grotesquely on the dry earth. Nor is she here to again trace the footsteps of a priest murdered in cold blood.

She’s not back to listen to stories of victims kidnapped by a terrorist group in Basilan nor to witness how the Badjao children dive in the deep blue sea to earn a living.

But as before, she stumbles upon stories after stories. Tales woven in the dark, in hushed whispers, in eerie silence, are all crying out to be heard: Sacks of rice distributed by politicians to voters less than 48 hours before Election Day; Teachers line up for money in a dark corner on the eve of Election; Of intense hunger; Of babies without mothers; Of memories of the thunderous sounds of flying howitzers; Of families without homes; Of fake municipalities; Of million-peso jacuzzis built by politicians out of people's money; Of teeming poverty; Of pain; Of still lives; Of nothingness.

There are urban legends, too but this one she found to be true: Mister Suave -- yes the man in the Parokya song -- lives on top of a tall tree in the middle of Sitio Kuhan, South Upi, a village at the end of the earth. He is there watching over the visiting muse. He is real. In the flesh.

In between chasing stories, there’s the day-to-day life some wolves parachuting from Manila never get to see. The muse is privileged to see these vignettes: Walk a few steps from the church and there’s an ukay-ukay kingdom; The orange Columbia cap belonged only to her; Wake up or pretend to be sleeping when you hear the bell in the priests’ house, hurry go hide the can of Red Horse; Share a meal of tulingan in the home of a stranger; Relax in Nodi and Giovanni’s driving prowess; Feel the safest on a motorcycle zooming at 120-kilometers per hour on zero visibility; Listen to the laughter of the children of Upi; Hear the chants of the Muslim faithful slicing in the stillness of dawn.

And only for the anointed ones: a taste of the best tasting buko pie in the universe.

This island is as real as it can be. In its fullness, it is more real than anything else. Who cares about missed flights back to Manila? Oh Mindanao. Shukran!
Posted by Iris Cecilia Gonzales at 1:49 AM