Our lives. Our anger 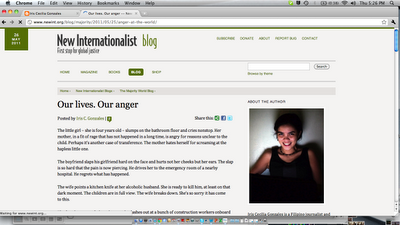 The little girl – she is four years old – slumps on the bathroom floor and cries nonstop. Her mother, in a fit of rage that has not happened in a long time, is angry for reasons unclear to the child. Perhaps it’s another case of transference. The mother hates herself for screaming at the hapless little one.

The boyfriend slaps his girlfriend hard on the face and hurts not her cheeks but her ears. The slap is so hard that the pain is now piercing. He drives her to the emergency room of a nearby hospital. He regrets what has happened.

The wife points a kitchen knife at her alcoholic husband. She is ready to kill him, at least on that dark moment. The children are in full view. The wife breaks down. She’s so sorry it has come to this.

The female owner of a brand new sedan lashes out at a bunch of construction workers onboard a truck. The truck accidentally bumped the car from behind. The driver is an old man. He could barely see the road.

We scream. We hurt our most precious ones. We curse. We throw bottles. We exchange invectives. We scream on the top of our lungs. We throw ourselves in a rage. We go ballistic. We run amok. We go mad.

I read fellow blogger Mari Marcel Thekaekara’s latest blog post Mayday on May Day and I was blown away. I totally agree with the part about a lot of ‘anger in people’ nowadays. ‘Yet, I see a simmering anger in people,’ Mari writes. I totally agree. Mari and I believe that this anger is brewing amongst everyone around the world and is affecting our personal lives.

There are countless reasons to be angry nowadays over the way the world has become. And I don’t think it’s just my imagination. The world is more screwed up now than it was before.

As Mari notes, for instance, corrupt bankers are driving away in their Porches at the expense of pensioners and their hard-earned money.

But it’s not just that. The stories are numerous – and they are evil and harsh. Pharmaceutical giants are funding maternal health campaigns just so they can rake in billions in profits from the sale of their contraceptive pills; health insurance giants care no more than bloating their claims; cellphone companies are faking their consumers’ bills hoping they could get away with it; a private hospital conducts a medical procedure that costs hundreds of dollars just to detect a simple case of sinusitis; patients are dying on the cold floors of government hospitals because corrupt politicians are pocketing part of the budget; innocent lives are lost in roads because employees in regulatory agencies are taking bribes from greedy bus owners; 57 people are massacred in broad daylight with hundreds of witnesses around and not a perpetrator convicted even more than a year later; and the most evil deed of all, priests are molesting children in between preaching the Holy Eucharist.

Who wants to be angry with the world, with loved ones and even with oneself?

Nobody wants to be angry. Anger is destructive and it hurts our most precious ones. But when we are angry or frustrated over the world’s follies, we are forced to let the steam off elsewhere. We lash out inside our homes. We hurt. We rob. We kill. We do what we can to fight for what is right. We demonstrate. We protest. We break down. We break up. We divorce. We run away. We abandon.

Indeed, when the greed in the world is larger than the world itself, people are bound to explode.

One can only take so much.
Posted by Iris Cecilia Gonzales at 2:38 AM