A report for The Philippine Public Transparency Reporting Project (PPTRP) 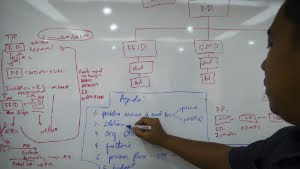 The allegations that surfaced during the Congressional inquiries into corruption at senior levels of the Armed Forces of the Philippines were stark and telling -- and many. The revelations that included serial house-buying overseas, globe-trotting wives and missing UN peacekeeping funds left many observers wondering and asking: How were all these allowed to happen? Where were the stringent checks and controls that ensured public money was only ever used for the public good?

In an interview with the Philippine Public Transparency Reporting Project (PPTRP), Romeo Tomas, Jr. Executive Director of the Revenue Integrity Protection Service (RIPS) says a key problem is that the modus operandi of corrupt government employees is more sophisticated than before and agencies are only now playing catch-up.

The RIPS is an agency under the Department of Finance (DOF) that investigates allegations of corruption within the department and its affiliated attached agencies such as the Bureau of Internal Revenue (BIR), the Bureau of Customs (BOC), the Bureau of Local Government Finance (BLGF), Bureau of the Treasury (BTR), the Central Board of Assessment Appeals, the Insurance Commission, the National Tax Research Center, the Fiscal Incentives Review Board and the Privatization and Management Office.

RIPs which was created just in 2003 files charges where necessary against erring officials and employees with the proper agencies including the Office of the Ombudsman.

Tomas says that after its launch, corrupt officials began exerting cunning in concealing the ways in which they pocket taxpayers’ money.

As mandated by law, public officials are required to file their Statement of Assets, Liabilities and Net worth (SALN) annually. The public document -- often dreaded by corrupt officials -- is designed, as it states, to detail one’s assets and liabilities and net worth before and during his term in a government office.

“Before [2003], officials were very relaxed in filling up their SALNs,” Tomas says.

“They just put everything in [it] because they didn’t expect it would be checked,” he told PPTRP.

But now, he says, corrupt officials no longer declare in their SALNs all their wealth such as properties and moreover register these assets in such ways that they cannot be easily linked to them.

There are many ways public officials work to conceal their illegally-gained wealth, Tomas says.

Dummies. These include the use of corporations, law offices and third persons as dummies for their properties. Small corporations, for instance, are formed and created, and these will now be the owners on paper of land assets, vehicles and other accumulated wealth.

Some also put the names of the properties in their relatives’ names. Tomas further maintains there are many cases where properties are listed under the names of a relative’s law office so that the link to the real owners is almost impossible to prove.

Wire transfers. Aside from the use of dummies and corporations, Tomas says public officials have also made their banking practices more sophisticated. Erring government officials keep their money in banks abroad – usually in Hong Kong, according to RIPS files.

“Some go out of their way to transfer money to other countries such as Hong Kong or Singapore,” Tomas says, arguing that this makes it more difficult for authorities to trace the money.

Reducing land values. Another scheme employed by erring public officials is the mis-declaration of properties, usually land assets. According to RIPS, it is common for public officials to conceal the land that they own by declaring only a portion of it. For example, if an erring official owns, say, a five-hectare land, he would declare only a portion of the land in the SALN.

Luxury vehicles. These are often put under the name of the erring government officials' children or trusted friends in the private sector.

Tomas, however, says that upon investigation, RIPS finds out that the children are barely earning and are thus unable to afford such cars.

“A case in point was a child who was barely 23 years old but he already had a number of luxury vehicles to his name.”

In a separate interview with PPTRP, Customs Deputy Commissioner Greg Chavez says that it is not only the ways of pocketing peoples’ money that changed but also the way public officials receive money or take bribes.

He says money now changes hands in the wink of an eye. “There are no paper trails anymore.” The exchange of money can happen in public and unsuspicious places such as fast food chains or children’s activity areas in malls.

Chavez heads the Run After the Smugglers (RATS) program of the BOC. Smuggling, he says often happens in connivance with agency officials and employees.

The Aquino administration has vowed to prioritize revenue leaks before implementing new tax measures and Finance Secretary Cesar Purisima has put the cost of smuggling and tax evasion at roughly PhP 200 billion (USD 4.6 billion) a year.

As part of the program to plug revenue loopholes, Purisima, in a separate interview with PPTRP, says the DOF has toughened the implementation of the government’s RATS and RATE (Run After Tax Evaders) programs.

As such, the government’s main revenue agencies, the BIR and the BOC, have been alternately filing cases before the Department of Justice (DOJ) every week. Purisima says this is to show that the government is very serious about its program to plug the leaks.

“It cannot be business as usual,” he argues. The Secretary believes these programs have been working effectively as is seen in the revenue increase. Revenues in February amounted to PhP 80 billion (USD 1.9 billion) slightly higher than the PhP 76.7 billion (USD 1.7 billion) generated in the same period last year.

The DOF has also set up the Pera ng Bayan (Money of the People) website wherein informants who wish to remain anonymous can report tip offs to it. Tomas says his office has received a lot of information from the website, which has resulted in the filing of 82 cases involving 122 personalities as of April 4.

Tomas says that the work is not easy because of the evolving schemes employed by erring public officials and employees.

To help government in going after corrupt state workers in the bureaucracy, Tomas recommends the need to increase the budget for such initiatives. He also would like to see the Bank Secrecy Law amended and the Anti-Money Laundering Council strengthened.

He says it is also important for government offices such as RIPS and the AMLC to be able to access bank records that would link individuals to their money trail. Another crucial element is prosecution. Tomas believes that prosecuting or going after erring state officials should be seriously pursued, with the cooperation of the Office of the Ombudsman and the DOJ.

For his part, Assistant Secretary Peter Calimag of the Revenue Operations and Legal Affairs Group of the finance department says that eradication of corrupt officials and employees from the DOF and its attached agencies is a priority. He urges the public to report information against erring personnel.

“The public is encouraged to register complaints or report any information against erring personnel of the revenue-generating bureaus and agencies which will aid the RIPS to investigate unethical and unlawful behavior through its “Pera ng Bayan” website. Philippine Public Transparency Reporting Project

(Photo for PPTRP by Jes Aznar)
Posted by Iris Cecilia Gonzales at 2:51 AM