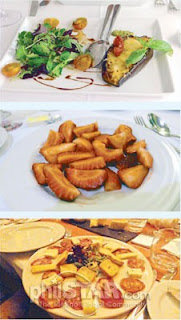 MANILA, Philippines - Fourteen hours in a plane’s economy class is no laughing matter. I was groggy by the time I got to my final destination and my stomach was grumbling from free beer and the smorgasbord of dishes served on board. But the crisp evening air that greeted me as I stepped out of the Lisbon Portela Airport jolted me out of the jetlagged state.

I finally arrived in Portugal in the western part of Europe, a charming country of 11 million people, nestled in the Iberian Peninsula and the Atlantic Ocean.

It was a long way to go for a field trip on water and climate change but I didn’t mind.

I was eager to learn about pressing global issues such as water management and climate change adaptation but to do it in the quaint country of Portugal makes it all the more engaging.

The reporting trip, organized by the Netherlands-based European Journalism Centre (EJC), brought together journalists and bloggers from mostly European countries, to raise awareness on the two key issues of water and climate change.

The trip is the culminating activity of Think 5, EJC’s latest round of global blogging competition wherein bloggers from all over the world discussed the different aspects of water and climate change adaptation.

EJC wasted no time. We were asked to be at the waiting area at 8:30 in the morning on the first day of the trip. I was exhausted from the long trip and needed more sleep, but my excitement prevailed. I crossed the street of the famed Avenida da Liberdade, one of Lisbon’s famous avenues which is lined on both sides by giant trees and the most luxurious shops of European brands.

We headed to the Fundacao da FCUL Auditorium in the University of Lisbon.

The first day established why we were there. We listened to lectures on the effects of climate change in Portugal and mitigation strategies.

The first to speak was Tiago Capela Lourenco, project coordinator of the Foundation Faculty Sciences of the University of Lisbon. Armed with a slideshow presentation and boredom-killing visuals, Tiago discussed the floods that hit Portugal in recent years that clearly showed the impact of climate change.

At the very building where we were in Campo Grande, Tiago said the waters rose fast when it rained.

In major tourist spots, he said many tourists – local and foreigners alike – were stuck because of the floods. The vehicles too were all swept away, literally.

Upon hearing this, I remembered the scenes of typhoons “Ondoy” and “Pepeng” which battered the country in 2009, attributed also to climate change.

Rui Cavaleiro Azevedo, press officer of the European Commission Representation in Portugal, did not have a power point presentation but when I interviewed him after his lecture, he provided concrete steps on what citizens in developing countries like the Philippines can do to help reduce carbon emissions.

He said doing baby steps such as commuting, sharing car trips or carpooling, using solar panels and other forms of alternative energy will all go a long way in helping reduce carbon emissions.

“The better option for Europe is to go for renewable energy. It’s going to be difficult but it would significantly reduce carbon emissions,” Azevedo said.

He said that among the strategies the Philippines may develop is to fully tap wind and solar energies.

“In the provinces, the Philippine government can invest in solar energy panels that would help utilize solar energy, save on costs and reduce carbon emissions,” Azevedo said


From the university, we went on a 20-minute bus ride to that part of Lisbon where we saw its deep blue waters.

We lunched al fresco as seagulls flew above us. After a sumptuous array of Portuguese dishes, we went to the European Maritime Safety Agency where we listened to the importance of European maritime safety and environment protection.

Oil spills, he said, are among the worst enemies of the environment and the only thing worse than this is the nuclear crisis in Japan.

In the days that followed, the program went beyond the usual lectures. We visited one of Lisbon’s best-kept secrets – the aqueduct and the Museu da Agua.

The aqueduct may be likened to our very own Walled City in Intramuros. However, it has a labyrinth of pipes.

According to GoLisbon, an online sightseeing site, the aqueduct was built in 1746 to bring the city its first clean drinking water.

“Lisbon’s remarkable aqueduct is made up of 109 stone arches, which were the tallest stone arches in the world when they were built. Its total length is 58 kilometers but the most visible are the 14 arches crossing the Alcantara Valley (the best views are from Campolide train station), the tallest of which rise to a spectacular 65 meters from the ground with a span of 29 meters,” it said.

We then went to the water museum, which I found to be a very quiet and serene place. The place is like a small church with a body of water inside.

In between, we dined in a traditional dimly lit Portuguese restaurant, which, according to the owners, used to be an old tavern where construction workers would hang out, drink beer and be merry.

And when I thought these visits were already a treat, we were off to Monserrate Palace in Sintra, an hour’s drive from Lisbon, tucked in the middle of a huge garden, right at the heart of Sintra, a place of cobble-stoned streets and quaint houses.

The palace is enough treat for the senses with its Moorish and medieval architecture.

According to Lonely Planet, the park is a 30-hectare garden with dragon trees, palms, agaves, camellias and Chinese weeping cypress.

On the way back, we stopped for coffee at the famed Cabo da Roca, a hilltop that represents the westernmost point of Europe.

I moved to the viewing deck to see for myself what the herds of tourists were gasping about and I, too, was at a loss for words.

There in front of me lay a blanket of emerald blue waters, as far as the eye could see, glistening under the yellow sun like a carpet of diamond studs.

It was a picturesque view of rolling hills and seascapes and a quaint little lighthouse sitting on a grass-covered hill.

I felt the sea breeze on my face as the sound of the waves smashing the rocks down below reverberated in the air.

We drove back to Lisbon in time for dinner in another fancy restaurant, the Restaurant Adlib of the luxurious Sofitel Hotel.

Dinner, Portuguese style, starts with soup, bread and a bowl of salad. The soups range from extraordinary (strawberry soup) to the usual onion soup while salads can be as exotic as an octopus salad or the usual Ceasar’s. The main dish – duck, meat, fish or a vegetable dish – is usually just as it is and is not, unfortunately for an Asian like me, served with rice.

Dessert is usually my favorite – tiramisu, ice cream, tarts or chocolate cakes. And then coffee or tea, with coffee usually served with cinnamon sticks.

The next day, we went outside Lisbon again. This is the part which many of the participants really enjoyed, mainly because they are mostly Europeans and don’t get to enjoy the warm sun onboard a sailboat.

Yes, we hopped onboard a catamaran, my very first sailboat ride.

We stayed in the middle of the ocean for several hours to wait for dolphins. Just when we were about to give up, we heard a sound and then a splash. By pairs, they came in and out of the water, to the delight of the whole group. Not surprisingly, cameras clicked endlessly.

We stayed for a while at Portinho da Arraida in a place called Setubal. It is a breathtaking coastline dotted with boats, beach houses, restaurants and pristine white seagulls hovering above.

Typical Portugese fare consists of green salad, a dessert of strawberries, and a platter of cheese and cold cuts.

The weeklong trip’s culminating activity was a visit to a wastewater treatment plant.

It seemed like an unpleasant way to end an educational field trip but it turned out to be an educational experience just the same. From this part, I learned how the European government puts value on the need to treat wastewater before pouring this back to the environment. They invest the equivalent of billions of dollars to maintain such a facility, something that many countries like the Philippines do not always have.

Another fancy lunch and a bus tour around the city on the last day of the reporting trip made the experience more than perfect.

It was a learning trip and a wonderful journey all together, giving me the opportunity to learn about pressing issues such as water and climate change and, more importantly, it gave me the opportunity to see yet another part of the world, to discover new things, taste new dishes, feel the crisp air and marvel at the breathtaking beauty of Portugal.

As noted travel writer Pico Iyer once wrote: “We travel, initially, to lose ourselves; and we travel, next, to find ourselves. We travel to open our hearts and eyes and learn more about the world than our newspapers will accommodate.”

And in this part of the world, I again had the privilege to discover the foreign – from cinnamon sticks used in cappuccino to pristine white seagulls pleasantly hovering above me as I listened to the sound of waves smashing the moss-covered rocks on the Portugal coastline.


(The author, who covers public finance for The STAR, is among the winners of THINK 5, a global blogging competition on water and climate change organized by the Netherlands-based European Journalism Centre. The reporting trip to Portugal is part of the award. The blog platform may be viewed at water.thinkaboutit.eu.)
Posted by Iris Cecilia Gonzales at 10:20 AM