I broke down and sobbed uncontrollably the first time I read Lara Logan's story. I am not even a fan of Lara nor is she among the foreign journalists I enjoy listening to or read often like Nicholas Kristof.

But anyone who feels strongly against violence against women will sympathize with her and will be outraged.

Reading or hearing stories like these pains me over and over again. The pain runs so deep, I cannot even begin to articulate it. Only through tears and sobs can I release the emotions. But that too is not enough.

And so I will write about it, hoping that this piece may help prevent similar violent incidents against women.

Unfortunately, evil deeds against women mean no more than the brutal acts that they are. I believe that it is not generally meant as a silencing crime as what the Committee to Protect Journalists (CPJ) says in a special report.

It has nothing to do with press freedom and if it does, it's the exception than the rule.

Because I will bet my life that sexual assault on women is happening somewhere around the world every  second and every minute. It is not limited to journalists. Some men do it for the plain and simple yet unexplainable fact that they are evil.

Below is a list of preventive measures from an article on BBC about Lara's attack.

Wear a sturdy belt
Don't wear a ponytail or necklace that can be grabbed
Don't take hotel rooms with balconies or easily accessible windows
Keep a can of deodorant by the bed
Move furniture in front of hotel room doors
Don't drink alcohol alone with men, particularly in the Middle East
Carry a rape whistle
Take male colleagues with you in volatile situations
Tell an assailant that your are HIV positive, pregnant or menstruating
Urinate, vomit or defecate on yourself 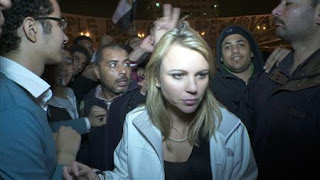 (Lara Logan minutes before the assault in Cairo. Photo taken from the Reuters website)
Posted by Iris Cecilia Gonzales at 8:42 AM