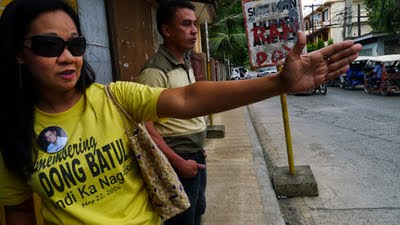 A project for the Philippine Public Transparency Reporting Project:

(Silenced: Letty Batul points to a spot where her brother, crusading Palawan journalist Dong Batul, was shot and killed in May 2006. JES AZNAR www.jesaznar.com)
PUERTO PRINCESA CITY -- The targeting of investigative reporters in Palawan has effectively silenced campaigning journalism in the region and is a danger for democracy according the sister of slain media activist Fernando “Dong” Batul.  As a result of the killings, Letty Batul says, campaigning journalists have fled the province.
“Many of them have gone already,” she told the Philippine Public Transparency Reporting Project (PPTRP) in an interview conducted shortly before the Department of Justice this week dropped the case against former Palawan governor Joel Reyes and five others who were the prime suspects in the January killing of Gerry Ortega citing lack of evidence.

Ortega, a campaigning journalist and environmental activist, had been a vocal critic of Reyes and other officials who he claimed had misused public funds generated from the Malampaya gas field. The former governor repeatedly stressed his innocence to both the charge of corruption and claims he was in any way connected with Ortega’s killing.
Speaking earlier this month and before the DOJ made public its decision, Letty Batul told PPTRP that the murder of her brother and Ortega succeeded in silencing serious whistle-blowing journalism here.
And she urged the Aquino administration to investigate the issues exposed by the slain journalists and to bring the perpetrators of the crimes to justice –saying it was the only way to combat corruption and build real transparency and accountability in the province. Without that, she says, there will be no effective independent monitoring of either the public or private sector in this resource-rich region.
Without naming names, Letty Batul says that at least two other journalists critical of alleged rampant corruption in the province have relocated to other areas deemed safer for them.
Her brother was a hard-hitting radio commentator when he was killed on May22, 2006 on his way to work in Puerto Princesa.
At the time of his death, Dong Batul had been focusing on conditions faced by employees working for the provincial government, according to his sister. He was also looking into the condition of workers from Palawan who were allegedly maltreated in Taiwan on contracts facilitated by the local government here.
A police officer charged with the killing of Dong Batul was acquitted by the Palawan Regional Trial Court in April despite four witnesses identifying the suspect in open court. Prosecution lawyers were reported to be “stunned” by the decision – and yet the suspect’s hands tested negative for traces of gunpowder burns.
The New York-based Committee to Protect Journalists (CPJ) said that authorities should address the death of Batul regardless of the recent verdict.
“It is hard to believe that justice has truly been served in the killing of Fernando Batul, who was murdered five years ago. Even though there has been a not guilty verdict, the journalist’s murder case remains very much open and the impunity with which journalists are being killed in the Philippines remains a matter of national shame,” says CPJ’s Asia program coordinator Bob Dietz.
The Batul family vows to continue the quest for justice for the death of Dong.
Malampaya funds
So too the widow and family of Ortega who was also gunned down in the city on January 24.
Ortega had been calling on the national government to audit the funds earned by the provincial government from the Malampaya deep water-to-gas project.
Some PhP 3.1 billion (USD 72 million) which the provincial government earned as its share in the Malampaya project has allegedly been misused according to Ortega.
The project is a joint undertaking of the national government and the private sector. It is led by the Department of Energy and has been developed and operated by Shell Philippines Exploration B.V. (SPEX) on behalf of joint venture partners Chevron Malampaya LLC and the Philippine National Oil Company-Exploration Corporation.
Since commercial operations started in 2001, revenues to the government in the form of royalties have reached some PhP 9 billion to 13 billion (USD 209 million to 302 million) a year.
The local government in Palawan claims 40 percent of the royalties given it says Malampaya lies within its effective jurisdiction.
The case is pending with the Supreme Court given local and national government have contradictory positions on the division of revenues from it.
During the previous administration, the national government released a total of PhP 2.9 billion (USD 67 million) to Palawan as part of an interim agreement while the case is still pending.
Based on this interim agreement, the provincial government of Palawan as well as the first and second districts are to share in the Malampaya proceeds.
Both the Batul and Ortega families believe that if corruption in Palawan were not rampant, the province would have already developed well.
“Imagine, Palawan was given billions of pesos in Malampaya funds but we haven’t seen any significant improvement,” a Palawan resident who wished to remain anonymous told PPTRP.
She declined to be identified for fear that “the authorities” might get back at her.
Patria Ortega, Gerry’s widow, has urged the Aquino administration to audit the Palawan government’s interim share in the Malampaya funds. On May 24, Patria and her eldest daughter Michaella urged the Senate to open an inquiry into the funds and personally delivered a letter to Senate President Juan Ponce Enrile.
“We gave him a letter asking for a faster release of the COA [Commission on Audit] special audit report about the Malampaya funds. We believe that this might have signalled the motive behind the murder of my father,” Michaella told PPTRP. Her mother added that Gerry was constantly looking through previous COA reports on the issue.
Patria added that her husband had often discussed the need to demand accountability for the Malampaya funds already released to the provincial government.
“Unless this is investigated, his death will go to waste,” she told a press conference at the DOJ last May.
Meanwhile, newly appointed COA Commissioner Heidi Mendoza assured that the commission would come up with an “honest report”, the first part of which is due to be released soon.
Patria, for her part, is pinning her hopes on President Benigno Aquino III to deliver on the promise of a straight path in Palawan or “tuwid na daan” which means leaving no room for corruption.
Like Batul’s family however, the Ortega family’s quest for justice appears an uphill climb.
On June 14, 2011 government prosecutors absolved Reyes and five others tagged in the murder of Gerry.
The DOJ only found probable cause against the governor’s aide Rodolfo Edrad Jr., Armando Noel, Dennis Aranas and Arandia. 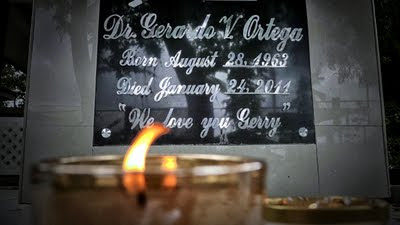 (The final resting place of another crusading journalist, Gerry Ortega, who was gunned down last January. JES AZNAR www.jesaznar.com)

“The DOJ decision is a blow beyond low. We lost dad and now we feel blatantly cheated. The panel said there was lack of evidence but absolved the owner of the gun and the self-confessed middleman…It is a grave injustice.”
She said the family would file a motion for reconsideration to appeal the DOJ’s decision.
Reyes, for his part, welcomed the DOJ decision.
“It is with a great sense of humility and relief that I accept news of the dismissal of the murder charges against me and my brother, Mayor Marjo Reyes of Coron,” Reyes said in a statement sent to reporters shortly after the DOJ’s decision was made public.
He maintained that those who planned the murder would have their day of reckoning. “Those who have plotted to unjustly destroy us, those who have perjured themselves and manufactured evidence, and who have tried to use the justice system to perpetrate this foulest of deeds, shall rue the day when they contrived this evil scheme. We shall expose them for who they really are, so that they will never again deceive anyone, anymore, at any time,” he said.
He also said that the incident strengthened his resolve to “continue with public service to give the people a better alternative to the kind of dirty and unprincipled politics being practiced by our opponents.” Philippine Public Transparency Reporting Project
Posted by Iris Cecilia Gonzales at 8:41 PM