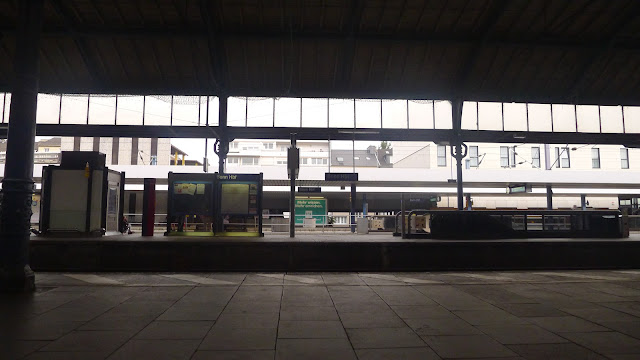 BONN, Germany – Grey is the color of departure, that short kiss of goodbye, that open-ended farewell. Of fourteen hours of separation. There are no warm hues, no kaleidoscope, no crimson orange sun on the horizon nor are there denim-color clouds above. There is nothing but gray, as gray as the last hour of a rainy day, as drab as the last smoke from a smoker’s burned lips.

The clock reads 8:44 pm but the sun has yet to set.  It is already pitch-black elsewhere in the world but not here in Europe. Yet, the long hours of daylight bring me no warm, especially not today as I stand on the dusty pavement of platform 1 at the Grand Central Station of Bonn and watch the red and gray IC train leave the rustic tracks and disappear toward a place called Hannover. I bade Jes goodbye as he left to pursue a total stranger in that far-away city to talk about photography.

The departing train leaves those left behind with nothing but the smallest particles of dust, too small to see but large enough to represent the feeling of melancholy on anyone left alone on that empty platform.

What follows after the deafening sound of a speeding train is total silence, a dingy emptiness. And then the footsteps of hundreds of passengers walking toward the rest of their lives as they wait for the next train.

Train stations are a stark metaphor of life. It represents hellos and goodbyes; of endless journeys; of people coming and going, disappearing into different directions. It’s about people moving on, moving away, moving to nowhere or moving to stop again. It’s about getting lost along the way and for the lucky ones, finding their way back or to those who choose otherwise, it’s about choosing to die by jumping off the tracks.

It’s about getting derailed. It’s navigating through the labyrinth of the subway at least 10 feet below the ground.

It was getting dark when I left the train station. It would be the first time on this trip that I would be walking alone on the cobbled streets of Bonn, back to a two-star hotel that had been our home for days since we hopped on the train from Frankfurt.

I managed to make it back to our borrowed room, thankful to my heart for lending some buoyancy when I need it, especially on the heaviest of days.

I spent the rest of the evening packing my stuff while the rest of Germany or perhaps the whole of Europe – in street cafes and bars, over beers and cigarettes  -- watched Portugal battle with Spain on a jam packed football field in Poland.

I was, as always, eager to go and leave again to yet another place and to go back to Manila in a few days.  I could never get used to the coldness and grey skies of Europe, notwithstanding the fact that I have visited more countries in this continent than I have ever done in Asia or America. I don’t really mind the weather. I have a wardrobe to keep me warm for any country on the world map but even the thickest of clothes can never warm the heart.

And so I bade the cobbled stones and the Renaissance architecture of Bonn goodbye, the blue cheese and the ice-cold beer, the euphoria in the air over Spain’s victory the night before and walked back to the Grand Central Station of Bonn to take the train to where my home really is whichever part of the world I may be. See you in three hours.