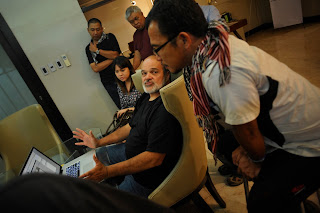 MANILA, Philippines - Kim Komenich does not recall exactly how old he was when he was assigned to cover the years of the Marcos dictatorship, an assignment that earned him a Pulitzer.

However, more than 20 years after, Komenich still remembers every scene in that historic period that saw the end of the Marcos era. He still remembers the smell of the streets that he walked on, the deafening voices of protests against Marcos, the cabbies who helped him get from one coverage to another, the dark corners of Manila, the chaos of the upheaval and every individual he captured through his lenses during his assignment here.

Komenich covered the 1986 Philippine Revolution for the United States paper Examiner. For his coverage, Komenich won the 1987 Pulitzer Prize in Spot News Photography.

Years later, even after exploring the world as a newspaper photographer, landing in different war zones and finding himself moving from the camera to video, Komenich still considers his Philippine assignment unmatched.

More than earning the Pulitzer for his coverage, Komenich feels that the People Power revolution and the upheaval of the Filipino people during the Marcos years is the most important story he has ever covered.

“In terms of the most important story of my life, it’s this. That’s why I’m here. I want to find out some of those people and it’s a story. I’ve covered a lot of crazy situations after I covered the Philippines but this is the one that has the most heart. A country as a whole took a chance,” Komenich says.

He has often pondered on the magic of the late Corazon Aquino and how she took on the Goliath that was Ferdinand Marcos.

“I wondered...in the United States who would that be? If the president of the US goes out in the streets, I don’t think that would happen,” says Komenich.

In his mind’s eye, Komenich still sees everything that he saw from behind his lens.

It is what he saw during those years that hasbrought Komenich back to Manila.

Landing on Philippine soil again, Komenich gets the sense that things are changing positively.

“I just get a sense that the country is moving on with its future,” he says.

He is now doing a documentary

, details of which he declined to divulge just yet, on how the lives of the people he encountered then has changed more than 20 years after.

Komenich believes that while his assignment may have ended, the story goes on.

It is because of this that Komenich took time off from his teaching profession.

“I’m teaching now. I get three months off. It’s off deadline so I can do what I want,” he says. 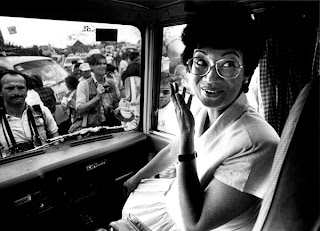 According to his biography posted on his website (www.kimkom.com), he worked as a staff photographer and editor for the San Francisco Chronicle from 2000 to 2009. He now works as an assistant professor at the San Jose State University in the US.

Photography has not ceased to amaze him and he believes that teaching is his way of “giving back.”

“For me, it’s always fascinating to do something and be paid to go witness something that other people will pay money to read...Everything I do with my camera is an attempt to tell a story,” he says.

Komenich believes he will keep on coming back to the Philippines, even after covering dozens of war zones and people’s uprisings in other countries.

This story, after all, is a never-ending one, he says.

Photographer-documentarist shows off his new gadgets. Photo by Jes Aznar (As printed in this Sunday's issue of Starweek)

Black and white photo of Corazon Aquino by Kim Komenich reposted from http://www.gmanews.tv/story/168797/Behind-the-lens-Pulitzer-prize-winning-fotog-remembers-Cory
Posted by Iris Cecilia Gonzales at 5:46 PM