Reforming the Bureau of Internal Revenue: Dream or Reality? 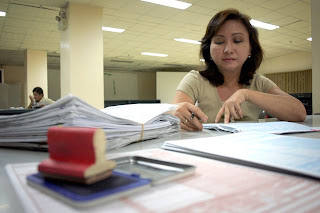 Victoria Constantino (not her real name) runs a hardware business in Caloocan City.

The money was for the examiner of the Bureau of Internal Revenue (BIR) who was assigned to assess the income tax returns filed by Constantino’s company.

“If you don’t pay, the examiner will give you problems,” Constantino told the Philippine Public Transparency Reporting Project (PPTRP).

Once, Constantino threatened to report the examiner to her superiors. “Go ahead,” the BIR employee said unfazed. Constantino decided keep silent instead. The corrupt official had won.

“I decided to give in to his demands because I want to continue running my business,” she said.

At another time, Constantino recalls having to pay “grease money” just to have her company’s receipts and ledgers certified by the BIR as is required.

The “grease money” costs roughly PhP 500 (USD 11) per booklet of receipt or ledger."

"If you don't give anything, they will just sit on it," she said.

Constantino can only imagine how it is for bigger companies. “The amount of grease money must be bigger for conglomerates and large taxpayers,” she said.

The businesswoman added that she lives in hope for a reformed BIR and the day entrepreneurs in the Philippines both big and small can deal with an “honest and sincere” tax bureau.

And such a bureau is exactly what new incoming BIR Commissioner Kim Henares has in mind.

It is a daunting task, she told PPRTP in an interview. However, Henares believes reforms are possible. She also justified her faith because she believes there are many of her colleagues in the bureau “who want to do good.”

Henares’ optimism comes from her previous experience of working in the agency having served as deputy commissioner from August 2003 to November 2005.

Now back as the new chief and “broom,” Henares has a lot of plans for the bureau.

Foremost among them is her declared promise that she will not ask employees to “moderate their greed” - as some of those in public life have urged, but to work instead to ensure that “every peso collected will go to the government as intended.”

Henares knows the critical importance of reforming the BIR.

Her agency, after all, accounts for 70 per cent of government revenues and with the government facing a widening budget gap that is projected to hit PhP 325 billion (USD 7.2 billion) this year ( (3.9 percent of gross domestic product) – the need for deep and lasting reform is now more urgent than ever.

As of end-July, the budget gap is already at PhP 229.4 billion (USD 5 billion) - already 70 percent of the full-year ceiling.

For the whole year, the BIR is tasked to collect PhP 860 billion (USD 19 billion). As of the end of July, the BIR collected only PhP 467.3 billion (USD 10.38 billion) - more than half – but that still leaves it needing to improve its rate for the remaining months if it still hopes to hit the target.

Benjamin Franklin famously stated that the only two certainties in life were death and taxes – and yet the system of self-assessment used in the Philippines combined with the legacy of poor and irregular enforcement has left many people trying to escape the latter as best they can.

It’s a chicken and egg situation according to one official at the Department of Finance who told the PPTRP that BIR employees allow themselves to be corrupted by accepting – or demanding – “all kinds of perks” –from lavish dinners and lunches through to extravagant gifts and varying amounts of “grease money.”

The other key problem according to BIR’s new head is the padrino or patronage system here: “We are too smart and we have a culture of patronage. Whether people want to admit it or not, they make decisions based on who recommended them.”

And yet all this notwithstanding, Henares believes that BIR’s reputation can still be salvaged and the situation be reversed. “I am giving everyone a clean sheet of paper,” Henares said.

The reforms she now intends to put in place are those she hopes will convince people the Aquino administration is serious in its plan to collect what is rightfully owed irrespective of who they might be.

Since taking over on June 30, Henares has started laying out her plans for internal reforms, which she divides in two.

The most important for her is the so-called performance management system wherein staff know exactly what is expected of them.

“There will be a contract between BIR as an institution and individuals as employees stating what the performance indicators will be. For me, what’s important is that everyone’s contract will be related towards our goal,” she said.

“Everyone should be part and parcel of the need for reforms. They should feel that they are contributing to the goal,” Henares said.

The BIR currently has 12,000 staff headed by Henares and six deputy commissioners – one each for the Information Systems Group; the Legal and Inspection Group; Operations; Resource Management; Special Concerns and Tax Reforms.

One critical area is the audit system –when BIR staff move in to examine a company’s books. A ranking official from the Department of Finance (DOF) - the parent agency of the BIR, say rampant corruption happens there.

“A lot of things can happen there,” says the official whose job it is to monitor BIR operations at the DOF level. She declined to be named because of the sensitivity of the issue.

Auditing happens at random. Officially, a BIR examiner audits a company’s books if he or she suspects that the company may be dodging its tax obligations.

However, the Finance official said the examiner could also choose to audit the company simply to harass the owner - especially if he thinks they have the capacity to pay a substantial amount of “grease money.”

Explaining the audit process, Wendell Ganhinhin, senior tax manager at the auditing firm Punongbayan & Araullo said that the purpose of an audit and investigation is to uncover violations against and non-compliance with laws and regulations.

“In the process, even compliant and law abiding taxpayers have to go through an ordeal to prove their innocence if they are under suspicion,” says Ganhinhin.

With the burden of proof generally resting on the taxpayer, long hours and many resources often need to be devoted to refuting findings of discrepancies.

He also maintains that there could be inefficiencies in the audit approach and the lack of necessary tools, such as computers, databases and online references which prolong the process.

“Hence, the audit period becomes a long agonizing process, which some taxpayers describe as a dreaded nightmare that they would not wish to experience again,” he said.

It is because of this that the taxpayer sometimes chooses to ‘settle’ or enter into ‘under the table’ deals with the examiner to make “things easier for his business,” the Finance official explains.

Henares told the PPTRP that she was well aware of the problem.

“We will have tighter internal control,” she said and cited the fact that if an examiner conducts an audit of a certain company he should be made to account for what he did and why.

“So for example, if you issue a Letter of Audit (LOA), before you move to another assignment, you should clear your LOA. You should be able to account for that,” she said.

More importantly, Henares says the examiners will be asked to defend their audit. “It’s like a thesis defense. We will ask: 'This is the assessment you made initially and your final assessment is this way but payments went down.' Why is it like that? Or why did it take too long? Why did it take two years?”

She also plans to have more audits during her term.

“Not everyone gets audited. It’s random but I think that every taxpayer should be audited at least once in their life,” Henares said.

Another area where corruption takes place is in the issuance of exemptions for existing tax regulation.

This is in the area of the BIR’s Legal and Enforcement Group.

The Finance official interviewed by PPTRP said that for the legal department to issue an exemption, the so-called “grease money” could run in “millions of pesos" because the exemption would effectively save the company a substantial amount in yearly payments.

Henares also plans to strictly implement the BIR’s Code of Ethics, which includes provisions that prevent employees and officials from accepting simple or lavish gifts for whatever occasion from individual and corporate taxpayers.

Under the Code, they will have to resist invitations to dine out as the guest of ‘clients’.

There will also be regular “rigodons” or shifts in assignments among revenue district officers, examiners and other field employees to prevent over familiarity with companies under their jurisdiction.

Henares said this would also provide for more efficient operations as the capacity of the BIR personnel would be matched with or suited for the tasks.

“You pace people based on their capacity,” she explains.

She will also support the regular lifestyle checks conducted by the Department of Finance by the BIR and Bureau of Customs officials and employees.

Henares adds that she will lobby for the agency’s removal from the Salary Standardization Law so as to provide key incentives to staff.

“I’ve said that we should be removed from the Salary Standardization Law,” she said. As a profit center, the BIR also deserves the retention of a fixed percentage of its collection as its operating budget, she said.

Henares says that she also plans to introduce a new data system in the BIR. “It’s important that you reform the process and you back it up with an efficient information technology system.”

And yet such reforms will demand a much bigger budget.

Henares’ predecessor, former BIR chief Joel Tan-Torres says that the lack of resources remains a major problem for the agency.

“The BIR’s manpower remains practically at the same level as the situation over 20 years ago when it had just over 10,000 personnel,” Tan-Torres told PPTRP.

He noted that the BIR’s operation budget lags behind comparable tax administration offices in the Asia-Pacific region: BIR budget is less than 1 per cent of its tax collections,

“This lack of resources substantially hinders the BIR’s effort to handle the ever increasing tasks and responsibilities,” Tan-Torres said.

Henares, nonetheless, remains optimistic that the reforms would be implemented.

Employees interviewed by the PPTRP are giving Henares a “honeymoon” period.

“We’ve known her. She is not new to us. I believe that for as long as the reforms are doable, we can do it,” said an employee who declined to be named.

Another official said Henares is known as “strict” and “straight” so people will have no choice but to follow that.

Finance Secretary Cesar Purisima, in an interview with PPTRP, said that if there were no corruption, the government would have more funds to get people out of poverty.

“We are serious in our efforts to curb smuggling and corruption,” he said.

With the government in dire need of revenues for social services such as public health and education, Filipinos will be keeping a tight watch on what happens at the BIR in the weeks and months ahead. Philippine Public Transparency Reporting Project