From the hills of Kanawan. My 11th entry in the blogging competition. 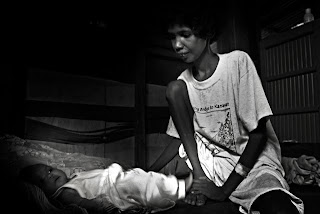 
text and photo by the author


MANILA, Philippines - Nerissa Salonga steels her frail body to get up from a makeshift bed inside a tattered hut in Sitio Kanawan, a farming community of the native Aetas in the province of Bataan, somewhere in the northern part of the Philippines.

The 22-year-old mother had given birth to her sixth child two months ago but still feels very weak as if it had been just yesterday. She needs to make some milk for her two-month old baby crying hungrily beside her but can barely gather enough strength to move. In the dimly-lit shelter, she sits and moves a few inches to reach for the bottle of milk at the far end of their bed, a slab of narrow wood.

She almost could not do it. Nerissa feels like she is breathing her last breath. She has been feeling very weak and has not been able to eat properly. It shows in her thin frame that has lost more than ten pounds. For several weeks already, she has been vomiting and has lost buckets of blood when she gave birth. And her dark skin could not conceal the paleness in her face.

It happened on a moonlit morning, at an hour when the only sound one usually hears is the crowing of roosters. This time, it is Nerissa's shrieks of pain that cut through the wee hours of dawn. The wailing echoed in the remote community that can be reached only after a five-hour drive from the Philippine capital of Manila and a 30-minute uphill trek across a mountainous area and a wobbly hanging bridge that spans over a flowing river.

In another hut, not so far away, lives the woman hailed as the midwife of the community. She shows me her sun-roasted and wrinkled hands. These, she says, may be old and tired but have brought out dozens of babies into the world. She has mastered the craft of childbirth, she says, and knows it like the back of her hand. Yet, she not is not really a midwife, a nurse or a doctor. She says she is just guided by instinct and it has always been that way.

Except in Nerissa’s case, she says. Nerissa’s screams of pain were not the usual sounds of agony of a woman giving birth. It was too much, she says.

However, the community “midwife” had no choice but to deliver Nerissa’s baby. Moving her to a hospital in the faraway city outside the village was just impossible. Sitio Kanawan, after all, is a remote place that is connected to the world only by a narrow, dilapidated and unstable hanging bridge.

Carrying a sick person would mean gathering at least ten men. And so Nerissa endured the pain and gave birth.

I met her in July last year, two months after she gave birth.

Two weeks after I met her, Nerissa died of complications related to childbirth. I was shocked. I thought she would recover and regain her strength in time.

Nerissa’s case is among the many stories of maternal deaths in the Philippines.

Indeed, maternal deaths remain rampant in a country of 92 million people sharing a budget of at least P1 trillion or USD20.8 billion a year.

Given this situation, the Philippine government, particularly the Department of Health has conceded that meeting Millennium Development Goal 5 by 2015 would be very difficult. It has noted this problem in its progress report on the MDGs which I have cited in a previous entry.

The Health department has said that it is stepping up efforts to reduce the ratio.

In an article by online news source IRIN published last May 26, 2010 in the Thomson Reuters website, an official of the Health department said providing further training to midwives would significantly help improve the maternal mortality ratio in the country.

The article quoted Rosalie Paje, division chief of the Family Health Office under the Department of Health, as stressing the importance of maternal healthcare. "Midwives play a crucial role in providing maternal healthcare, especially in geographically isolated and disadvantaged areas and those affected by armed conflict where doctors and nurses are scarce," Paje said in the article.

Furthermore, there are an estimated 17,500 midwives registered under the Professional Regulation Commission (PRC) working in the public health sector, the article said.

“But that is barely enough to service the 41,841 barangays (the smallest government unit) throughout the archipelago nation,” it also said.

And this harsh reality couldn't have been more felt by Nerissa that early morning last year in the hills of Kanawan.
Posted by Iris Cecilia Gonzales at 10:26 AM